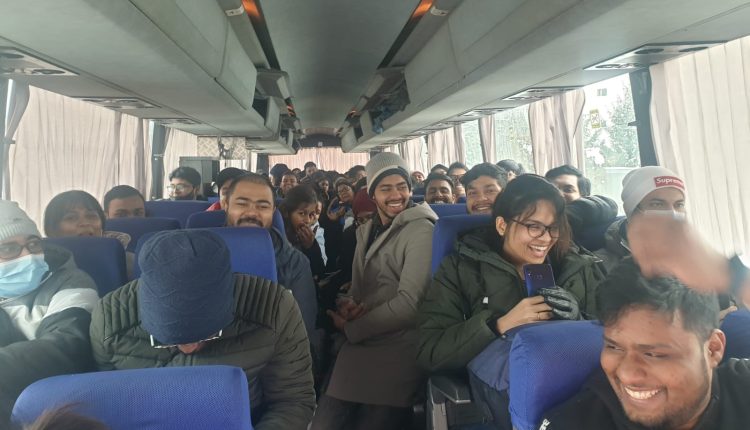 Bhubaneswar: Another 65 Odisha students, stranded in Kharkiv and Pesochyn, were evacuated from war-torn Ukraine on Friday in two special buses arranged by the Odisha government.

One could sense the relief in their voices, having suffered the trauma of living in shelters and bunkers amid loud bombardment since Russia invaded Ukraine last Thursday.

According to official sources, they were taken to the Ukrainian border through Lviv, which is 80 km away from Poland. Besides transportation, the government had arranged food for all the Odisha students stranded there through local sources.

Earlier, 25 first-year students of Kharkiv National Medical University had taken a bus ride from Pesochyn, which was arranged in coordination with a state-based private agency that had sent the students to the medical institute.

These students had trudged to Pesochyn in freezing temperature after the Indian Embassy issued an ‘urgent advisory’, asking its citizens to leave Kharkiv by 9.30 pm IST based on inputs received from Russia on further deterioration of the situation in the city. Most students from Odisha study in medical universities in this second-largest city in Ukraine.

A total of 199 students have so far returned to Odisha and efforts are on to safe evacuation all our students from the war zone, following which they will take the special flights to India under Operation Ganga, the CMO office said.

While State Resident Commissioner in New Delhi is coordinating the entire evacuation process, the government has deputed special representatives to Poland, Hungary, Romania and Slovakia to monitor the entire operations.

Notably, 60 students from the state had arrived in Delhi this morning even as another group began its journey from Ukraine due to the efforts of Chief Minister Naveen Patnaik and Global Focus.

At least 425 students from Odisha were in Ukraine when Russia launched its military operation and between Friday and Wednesday noon, 28 students had returned to India, the sources added.