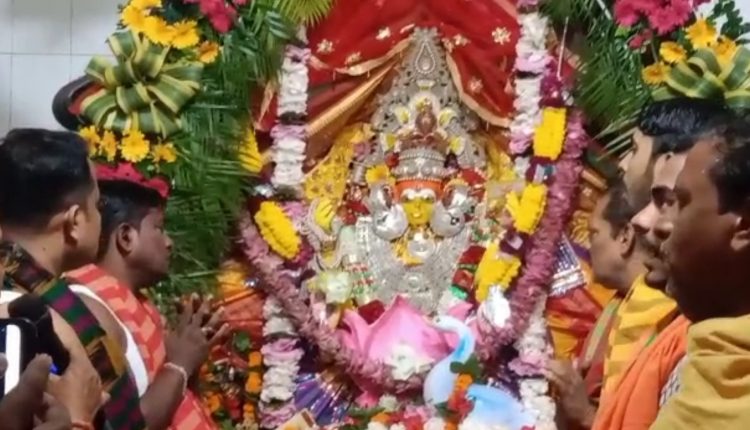 Bhadrak: One of prominent Shakti shrines in Odisha, Maa Bhadrakali temple in Bhadrak was thronged by hundreds of devotees to offer puja to the Goddess on Monday.

It has been a practice at the temple since its inception to worship Goddess Kali in her 7 incarnations for 7 days beginning from the Kali Puja. The deity is decorated as per the incarnations on each day. The Devi will appear in Vedamata, Mahakali, Rajrajeswari, Singhabahini, Jagaddhatri, Mahasaraswati and Mahalakshmi incarnations during the period.

On the first day on Monday, Devi was worshipped as Vedamata with Chandipatha (chanting of hymns for Goddess Kali in the form of Goddess Chandi). Having darshan of Kali in Vedamata incarnation is considered is highly pious. It is believed that all the wishes of a devotee are fulfilled if he offers puja to the Goddess in the temple on this day.

The temple management and local administration have made necessary arrangements for the 7-day puja which will start from early morning and continue till late night. For the convenience of the devotees, the temple premises has been spruced up and decorated with flowers, festoons and colourful lights.

The temple is celebrating the Kali Puja with public participation after a break of 2 years due to COVID pandemic. Since the number of visitors to the temple is expected to be high, the administration has deployed police to ensure disciplined and hassle-free darshan of the deity in the temple.