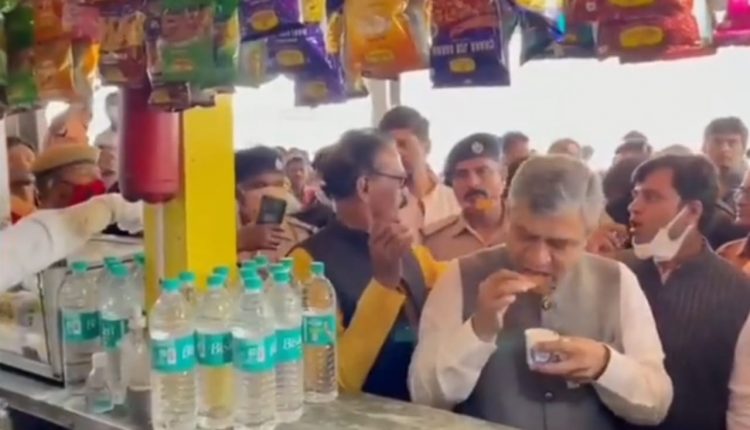 Jharsuguda: Railway Minister Ashwini Vaishnaw, who is on a two-day to Odisha, had his morning tea at Jharsuguda railway station on Tuesday.

He also conducted a surprise inspection at the station.

The Union Minister told the media that the Railways is upgrading infrastructure to increase the speed and turn-around time of trains benefiting the public.

He further said that Indian Railways with the cooperation from India Post will renovate the Jharsuguda Post Office.

Notably, Union Education Minister Dharmendra Pradhan had written to Vaishnaw in August, seeking a heritage tag for the 126-year-old building, which houses the post office. He stressed restoration, maintenance and re-operationalization of the post office.

According to the itinerary, Vaishnaw will be holding an organisational meeting till 4.30 pm before leaving for Delhi this evening.

On Monday, the Railway Minister held discussions on infrastructure development works in Odisha, especially in Jharsuguda. Besides safety issues, he suggested several measures to improve passenger amenities in SER and ECoR jurisdiction.

He had arrived in Jharsuguda around 5 pm.

This is Vaishnaw second visit to Odisha after being inducted into Modi 2.0 cabinet. He was in the state on a four-day visit in August and had embarked on the BJP’s ‘Jan Ashirwad Jatra’. He travelled to Rayagada in a train and later visited Koraput, Nabarangpur, Kalahandi and Balangir for the party’s programme.

OPHWC Deputy Manager In Vigilance Net; Raids At 10 Properties, One Worth Rs 4 Crore