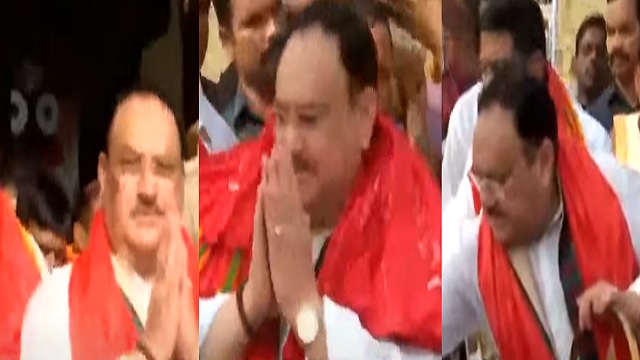 “Nadda had a very peaceful ‘darshan’ of the deities inside the temple. He also went to the Jagannath Temple’s ‘Ratna Bhandar’ and took stock of the issue regarding the missing keys and duplicate keys,” said a sevayat to media persons.

According to state BJP sources, Nadda is scheduled to visit Tihidi in Bhadrak district to attend late BJP leader Bishnu Sethi’s ‘Shradhanjali Sabha’ following which he will visit NIRTAR in Cuttack’s Olatpur.

Nadda will then return to Janata Maidan in Bhubaneswar again to address members of several morchas of the party. He will leave for Delhi at 7 pm after meeting the core team of the Odisha BJP at the party office, said sources.

DCP Bhubaneswar has issued a traffic advisory in view of Nadda’s visit:

* Vehicles coming from Jaydev Vihar and intending to move towards Nalco Chhak and further and vice-versa via Xavier Chhak in the morning and evening hours (10 am to 4 pm) are advised to start early for their destinations on September 30.

* Vehicles coming from Acharya Vihar and intending to go towards Nalco Chhak via Apollo Hospital-Sainik School road and vice-versa in the morning and evening hours (10 am to 4 pm) are advised to start early for their destination on September 30.

* Vehicles planning to travel through Jaydev Vihar and Acharya Vihar are advised to travel by alternative roads.

* Vehicles from feeder roads emerging at Jaydev Vihar-Nandankanan road are advised to start early, especially in the morning and evening hours (10 am to 4 pm) on September 30.