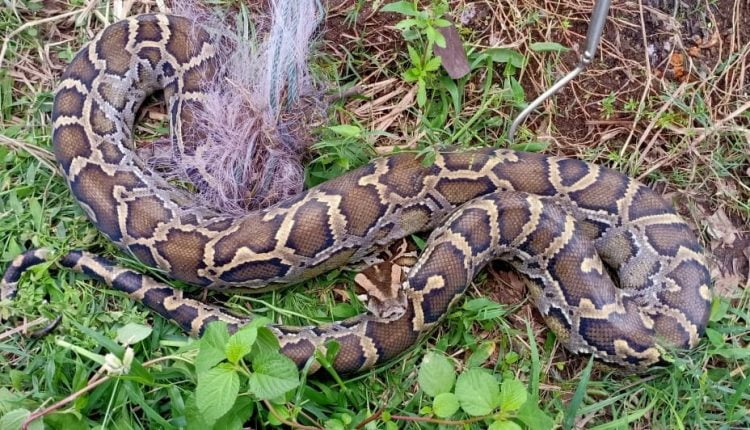 Puri: Another Burmese Python got trapped in the fishing net of a villager from a paddy field in the district on Tuesday.

With the rainwater overflowing in ponds, canals and farm land, Balaram Sahu, belonging to a village near Chandanpur, had cast his net in his paddy field to catch fish Monday night. When he went to collect the fish on Tuesday morning, he found a big python trapped in the net.

He managed to pull the net along with the python and took it to the village. On being informed by the villagers, Nihar Ranjan Panda, a member of Snake Helpline went to the spot and identified the snake as a Burmese Python.

With the help of villagers, Nihar cut the strings of the fish net and released the 8-ft snake. Later, he handed over the python to the Range Officer, Puri who will make arrangement to release it in natural habitation.

Earlier, several pythons have been found trapped in fishing net in the area. Subhendu Mallik, general secretary of Snake Helpline, said, “We have rescued at least 10 Burmese Pythons from that locality in the last 10 years. Since the python that was rescued today has no apparent injuries, we have advised to release it in a swamp.”

BPIA In Bhubaneswar To Be Developed Into World Class Green Airport