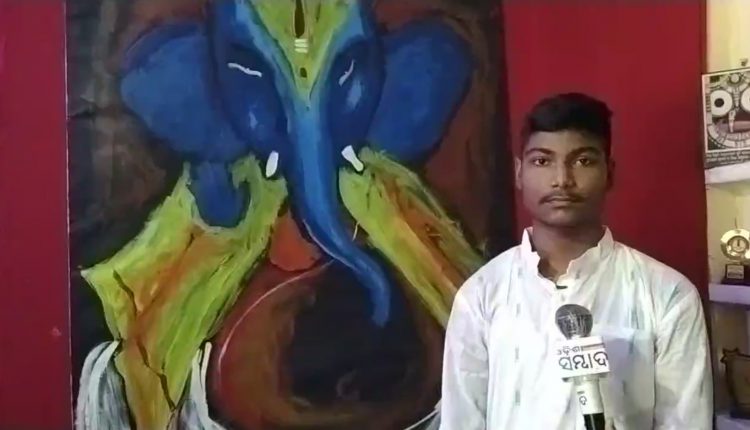 Puri: A Class IX student has drawn a painting of Lord Ganesh through reverse speed painting in 6 minutes in Odisha’s Puri town.

The student, Ayush Mohapatra, celebrated Ganesh Puja in a unique way by attempting to set a record in reverse speed painting. He drew an image of Lord Ganesh on the occasion.

Ayush drew the painting with acrylic colour on canvas. He used his both hands to do the painting at a fast pace. The young artist completed his 5 ft high creation in just 6 minutes.

Ayush, who has been painting since childhood, feels that he has a natural talent and draws inspiration from different shades of colours in nature. Besides his studies and painting hobby, he also teaches drawing to children of an orphanage in the town.

Ayush, who has won several awards in different national and international drawing competitions, has entered his name in India Book of Records for his skill in reverse speed painting.

His father Nityananda Mohapatra, who stays in Basili Sahi of Puri, said, “Ayush was attracted towards painting since childhood. My entire family has been supporting him for his passion for painting. We extend whatever help is possible on our part. His mother guides him in the concept and finer aspects of painting while I fetch him the materials like canvas, paper and colopurs. I want him to continue the painting and bring laurels for Odisha and our country in future.”

Tea Vendor Murdered In Front Of DCP Office In Bhubaneswar