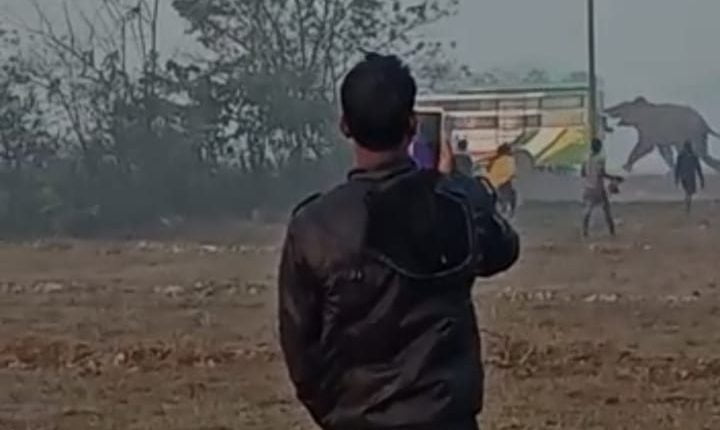 Baripada: In a scary incident, an elephant was spotted pushing a bus in Chakundapada under Sureidihi panchayat of Ankar-Rasgobindpur range in Odisha’s Mayurbhanj district.

In a video which has gone viral, it can be seen that a wild elephant is pushing a passenger bus from behind at Tikarpada under Rasgobindpur forest range.

According to reports, a herd of 65 elephants from Jharkhand were crossing through Ghasamari forest under Olamara-Rasgobindpur main road on Sunday morning. Around the same time a private bus full of passengers was on its way to Rasgobindpur from Olamara village in Balasore district when a tusker from the herd chased the bus and pushed it from behind with its trunk to some distance.

The elephant’s tusks also damaged some window panes of the bus, leaving the passengers scared. The video was filmed by some locals. All the passengers are reportedly safe but the scared driver is stated to have left the vehicle.

Earlier, an elephant calf fell into a well in Chakundapada village on Saturday night. Local forest officials and firefighter teams of Baripada and Betnoti reached the spot and started rescue operation. The well was filled with water after which the mother elephant pulled the calf out and both left for the forest on Sunday around 9 am.

However, a connection between the two incidents is yet to be established.