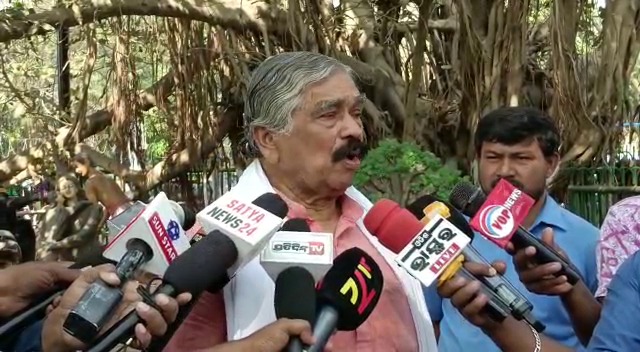 Bhubaneswar: Alleging large scale scam in mining sector and illegal sale of 30,000 acres of land in Odisha, veteran Congress leader and MLA Suresh Routray on Tuesday demanded a CBI investigation into all these ‘irregularities.’

“Large scale irregularities have been taking place in the mining sector in the state. Huge volumes of minerals like chrome, bauxite, iron ore, coal and manganese are being plundered,” the Jatni legislator alleged while talking to reporters.

In order to expose all those involved in the irregularities in mining activities, a thorough probe must be conducted by CBI, he said.

This apart, over 30,000 acres of land have been sold at throw away prices illegally and officers in Naveen Patnaik government have made money to the tune of Rs 20,000 crore, the senior Congress leader alleged.

Though the Chief Minister himself may not be directly involved in allotment of these land, non-Odia officers are involved in the sale of land in Bhubaneswar and adjoining areas, Routray claimed.

Sale of land had taken place in areas including Chandrasekharpur, Daruthenga, Chandaka, Paikarapur, Patia, Chatabar and Sarua, he said, adding that playgrounds, cremation grounds, barren land, school fields and forest land have been sold through IDCO under the garb of launching projects.

Demanding immediate cancellation of allotment of all these land allotted through IDCO, Routray said a CBI probe into the whole episode must be ordered to expose those involved in illegal activities. “No one should be allowed to go scot-free,” he added.

No senior government official was immediately available for comment on the allegation made by Routray.

What Will Shah Rukh Khan Do After Pathaan’s Release Tomorrow? Know His Plans