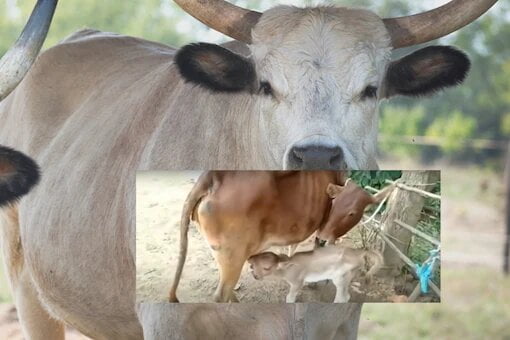 Bhubaneswar: Residents of Odisha’s Nabarangpur witnessed a miracle on Tuesday when they witnessed a cow giving birth to a calf with two heads and three eyes.  Devout villagers have begun worshipping the two-headed calf as Durga Avatar, since it was born on the auspicious occasion of Durg Puja.

The calf was born in Bijapara village in the district.

Media reports said that the cow was owned by Dhaniram, a farmer of Bijapara village of Kumuli panchayat and had a harrowing time when she went into labour. Since the unique calf was born during the occasion of auspicious Navratri, people in the village are considering the animal a form of the Hindu Goddess Durga. Many have even started worshipping the calf as the avatar of Maa Durga.

Speaking to the media, Dhaniram’s son said that the calf has been experiencing some trouble drinking milk from its mother, so they had to purchase milk and feed it. Dhaniram had bought the cow two years ago.

The video of the unique animal was also shared on YouTube on Tuesday. In the one minute 24 second-video, the calf is seen struggling as it feeds on the cow’s milk. The video also shows how villagers are worshipping the calf after making it face south.