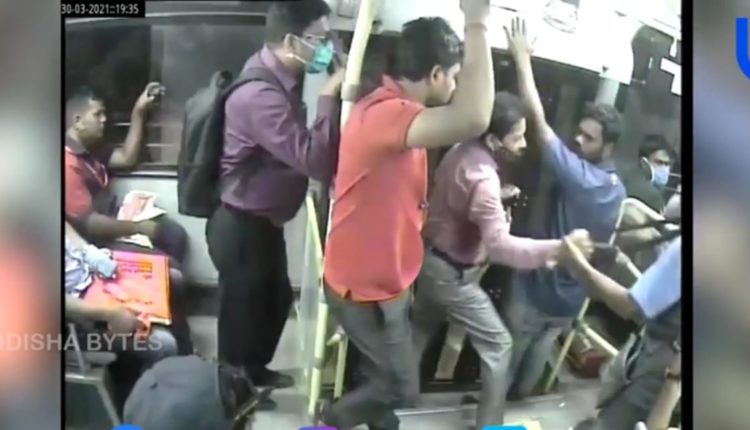 Bhubaneswar: In a clarification on the Hanspal incident in which a passenger was injured on Tuesday, the Capital Region Urban Transport (CRUT) on Wednesday stated that the MoBus staff neither pulled nor pushed the passenger.

In a press statement, the company termed the incident as an unusual and rare happening in the last two years of MoBus operations. In a certain section of media, it was reported that the MoBus guide pushed the passenger causing injury to him. But it can be seen from the video footage of the CCTV installed in MoBus that the passenger had an altercation with the guide and tried to pull him out of the bus. The passenger caught hold of the cash bag from the guide.

Nowhere the MoBus staff pulled or pushed the passenger during the incident. It is also visible that co-passengers travelling in the bus took side of the Guide and challenged the passenger for his wrongful act.

Further, the passenger was destined to get down at Hanspal. The bus duly stopped at Hanspal bus stop and a lady commuter got into the bus. However, the concerned passenger continued to argue with the Guide and did not get down at his stop.

As he was standing very close to the door keeping his back towards it, when the automatic door closed he got stuck in the gate. In this situation, the passenger tried to force open it and can be seen banging the door. It appears that somebody pressed the emergency button to help the passenger but he fell down causing alleged injury to him, the statement said.

Taking serious note of the incident, CRUT has ordered an inquiry and taken the concerned staff off the duty till completion of enquiry. It assured that if any of the staff of CRUT is found guilty, suitable and severe action will be taken.

Managing Director of CRUT Arun Bothra said, “For us, customer’s satisfaction and safety is priority. We go extra mile to ensure the same. There is no compromise in this regard. CRUT will continue to serve people of Capital Region in the best possible way.”

Also Read: Passenger Critical After Being ‘Pushed’ By MoBus Guide In Bhubaneswar

24 +ve Cases In 7 Days, Will This Angul Village Be Declared Containment Zone?