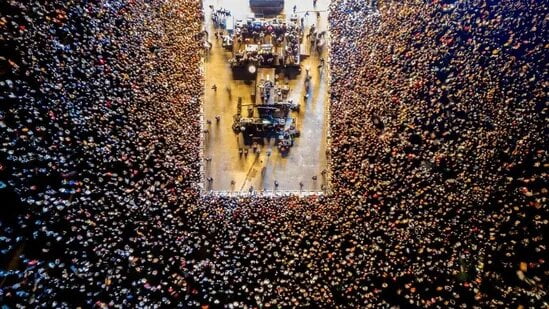 Riyadh: Thousands of fans turned up for Bollywood actor Salman Khan performance in Riyadh, Saudi Arabia as part of his ‘Da-Bangg’ tour. Many attendees shared videos and photos from the event on Twitter and claimed that it was attended by thousands of people.

Salman’s ‘Da-Bangg’ tour featured celebrities Shilpa Shetty, Prabhu Deva, Aayush Sharma and Saiee Manjrekar. Photos and videos from the concert went viral on the internet. In a few videos on Twitter, Salman can be seen dancing to a mash-up of some of his famous songs from ‘Maine Pyar Kiya’, ‘Hum Aapke Hain Kaun’ and many more, Hindustan Times reported.

The official Twitter account of The Boulevard Riyadh also shared a video of Salman’s performance and captioned it, “This night was not like any other night. We lived it with Bollywood star Salman Khan and DA-BANGG stars… with their songs and reviews that amazed everyone in.”

One fan shared a video from the event and wrote, “LOVE.” Another one shared a video of Salman’s message after his last performance on the stage. The fan wrote, “In the end, Bhaijaan Salman Khan promised to Riyadh people and fans I am coming next year Inshallah…this statement by megastar Salman Khan and also given beautiful msg to Indian ppl who working here…so Salman Khan will come again to Riyadh next year sure.. #SalmanKhanInSaudiArabia”

One fan tweeted, “Salman Khan’s Unmatchable Craze & Public Crowd In Riyadh Saudi Arabia At Dabangg Tour Reloaded Even.” Another fan pointed out the number of people who attended the event and said, “#SalmanKhan’s #DabanggReloaded tour has received an unprecedented response at Riyadh. As per officials, more than 80K people gathered to watch Salman Khan. @BeingSalmanKhan’s craze in Gulf is a dream for any other star. The undisputed king of Gulf.”