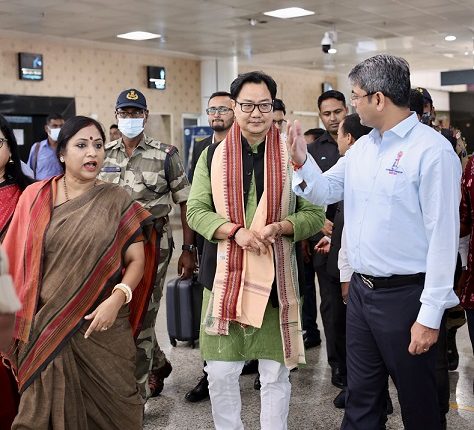 Bhubaneswar: Union Law Minister Kiren Rijiju arrived in Odisha’s capital on Tuesday to attend the opening ceremony of the FIFA U-17 Women’s World Cup 2022, which will kick off at the Kalinga Stadium in a short while.

Rijiju will also inaugurate a new office of the Additional Solicitor General and interact with the Orissa High Court Chief Justice and other judges.

On Sunday, ahead of the kick-off, Sports Minister Anurag Thakur launched a campaign, nominating Rijiju to post a video supporting the team. Rijiju responded sportingly, executing a perfect ‘rainbow flick’ in the garden of his official residence.

Rijiju then went on to nominate badminton star P V Sindhu and actor Akshay Kumar to join the campaign.

India and the US will face off in the inaugural match at the Kalinga Stadium on Tuesday. India is in Group A alongside US, Morocco and Brazil.

India’s fixtures in Group A:

The matches can be seen live in India from 8 pm. When and where to watch the live streaming:

Live streaming of India’s matches will be available on JioCinema.

Let us support, and cheer our Indian girls in the FIFA U-17 Women's World Cup. #U17WWC #KickOffTheDream ⚽️ pic.twitter.com/ag210UHnde

The Official Slogan of FIFA U-17 Women’s World Cup India 2022, #KickOffTheDream perfectly captures the aspirational & empowering message of the tournament as #FIFA looks to grow women's football and leverage tournament as a platform to inspire girls across the world. pic.twitter.com/BIf4yNVWWY

The official emblem for the #FIFA U-17 Women's World Cup India 2022™ is a joyous combination of elements from the natural world and Indian culture.

The bright blue waves, droplet frames of marigold flower, the style & design together celebrate the joy of football. pic.twitter.com/v3T9YCFZqL

#DoYouKnow!#Ibha™, the official mascot of #FIFAU17WWC stands as a symbol of the truly encompassing nature of this tournament.

The Asiatic Lioness's name has been derived from the #Khasi scripture of northeast #India, which loosely translates good vision & feeling of love. pic.twitter.com/WTv4t1vIb4

Asked To Attend School After Puja Vacation, Boy Sets Himself On Fire In Odisha