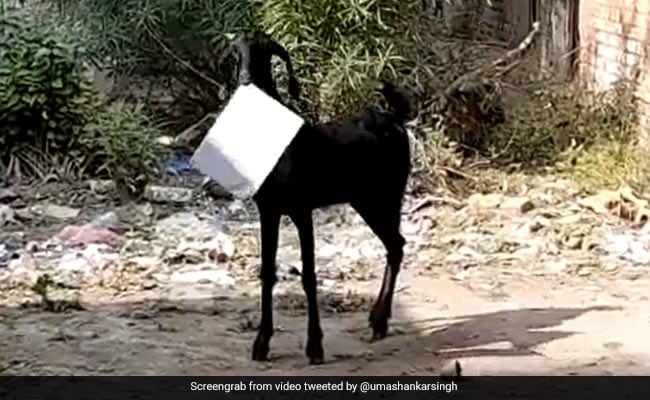 New Delhi: In a hilarious video on social media, a goat is seen running away with official documents while the employee is seen chasing it to get back the important file. The incident took place in Kanpur, Uttar Pradesh, where a goat entered a block office and took away the papers of a government employee. Since the video went online, it has gone crazy viral, grabbing the attention of thousands and hundreds of users.

The video opens with a black goat holding the document from one side in its mouth. The employee to whom the document belongs is also visible, but as he moves forward to get back the papers, the goat starts running. What is even more amusing in the video is the background sound, in which another person is irritatedly heard calling out, “Aree Yaar Dede” to the goat. However, the goat doesn’t stop for even a second.  This chase lasts till the end of the video. In the last part of the video, the employee can be seen running behind the goat far off in the distance. However, he later manages to get the papers back, but the goat has already chewed one part of them.

Netizens were both surprised and amused. The video also attracted some hilarious reactions, with likes in the thousands and hundreds. One user expressed, “How the animal reached for the papers is really strange.” Another user said, “Goat is inspecting government work.” A third person commented, “Goat looks official.” Many users questioned how the goat managed to take those papers, while some simply dropped the laughing emojis in the comment section.