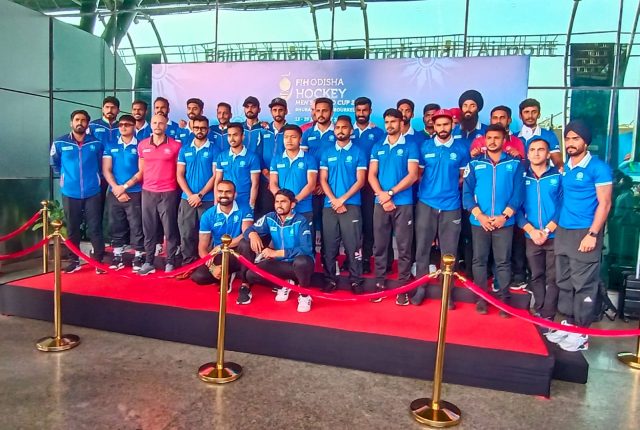 Bhubaneswar: The Indian men’s hockey team received a warm welcome in Bhubaneswar on their arrival at the Biju Patnaik International Airport (BPIA) on Tuesday morning ahead of World Cup 2023.

The Indian team, led by Captain Harmanpreet Singh, will reach Rourkela from Bhubaneswar via Jharsuguda airport in the evening and begin their practice sessions at Birsa Munda International Stadium from Wednesday.

The accommodation of the Indian players has been arranged in the newly built hotel near the Birsa Munda Stadium. The teams from other countries will arrive in Bhubaneswar and Rourkela in the first week of January.

“I am glad that I will be playing the Hockey World Cup on my own soil. We have been practising in Bengaluru and will continue it at Rourkela. We look forward to perform well in the tournament. The state government has taken a good initiative to organise hockey world cup matches at two places in Odisha. Our first target is the quarterfinal. We will try to enter the round of eight by doing well in the first couple of matches,” vice-captain Amit Rohidas told media.

Notably, the 18-member team for FIH Odisha Hockey Men’s World Cup, which is scheduled to be held in Bhubaneswar and Rourkela from January 13-29, was announced on December 23.

Ace drag-flicker Harmanpreet has been named the Captain of the squad with Odisha’s Amit Rohidas as his deputy. Another Odia player Nilam Sanjeep Xess has also been included in the team.

“We have chalked our strategies and we will plan to follow them accordingly. It will be challenging for us to play at Kalinga Stadium hockey ground. However, our early arrival in the city and practice sessions will help us get used to the pitch,” Harmanpreet told local media.

“Huge crowd will be expected in Odisha. We will take it positively by considering the crowd as the 12th man,” he added.

It is pertinent to mention here that the world cup trophy arrived in Odisha capital on December 25 to a rousing welcome by sports enthusiasts, fans, and lovers of the game at Biju Patnaik International Airport where it was received by Hockey India president Dilip Tirkey.