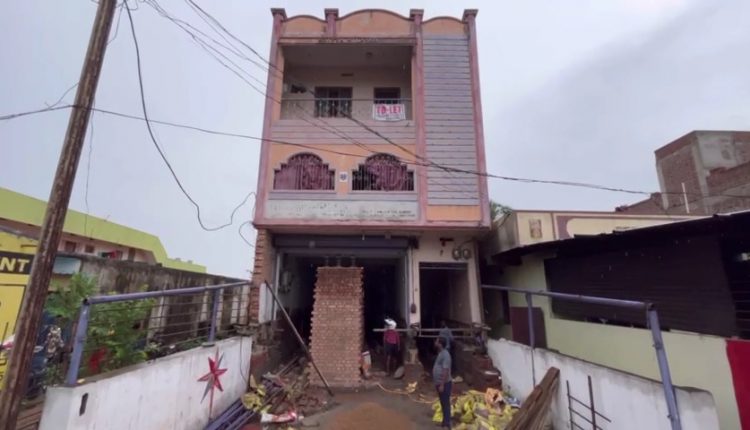 Rayagada: The house lifting technology, which has proved to be a boon for the house-owners in the areas prone to waterlogging, has reached a remote village in Rayagada district of Odisha.

With the help of this technology, N Ravi Shekhar of Amalabhatta village under Rayagada block had constructed his house with a plinth area of 1200 square feet as per the approved plan in 2015. At the time of the construction, the house was at the same level of the road running in front of it.

Over the years, the road was repaired and newly laid raising its height by nearly 2 feet. As a result, the ground floor of Ravi’s two-storey house used to get inundated by rainwater in rainy season. Besides, filthy water from nearby residences also entered the premises.

On coming to know about an engineer and his team of Rohtak in Haryana using house lifting technology, Ravi contacted them. Following discussion on the details over phone, the team from Rohtak, led by their manager Gyan Swamy, reached Amalabhatta last and started the work.

The team including masons and around 15 workers first dug up the foundation of the house. Then they fixed hydraulic jacks and wood planks under the base of the structure. They raised the house by a few inches everyday. It took them a month and 3 days to lift the entire structure by 4 feet.

Speaking on the project, Gyan Swamy said, “We do house lifting work all over the work. We are using the latest technology for the purpose. We normally get the work order for 2-3 feet lift. But in this case, we are working on 4 feet raise.”

“During the work, the ground floor is vacated. The family can stay in the first floor safely. We hope to complete the work in one more week,” he added.

Ravi claimed that his house was the first structure in the district to have been lifted with this technology. “The team from Haryana are professional people. The work has been progressing as per the dateline fixed by them. Around Rs 15 lakh would be spent for the total work including construction of new foundation,” he said.