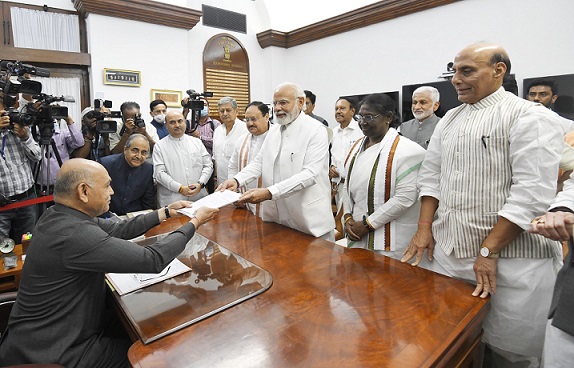 New Delhi: The President of India is elected not directly by the country’s citizens but indirectly through people’s elected representatives — members of both Houses of Parliament and Legislative Assemblies of states, which is known as the electoral college.

Droupadi Murmu, a tribal BJP leader from Odisha’s Mayurbhanj district and former Governor of Jharkhand, is the BJP-led NDA’s Presidential candidate. The Opposition has fielded former Union minister Yashwant Sinha against her.

BJD and YSRC have announced support for Murmu. AIADMK is also likely to vote for Murmu. BSP has also announced to support her, among other parties.

The polling is based on a system of proportional representation and a single transferable vote system.

The vote of an MP or MLA is not counted as one. Rather, the value is determined based on the population of a state in accordance with the Census data of 1971.

The value of a vote is determined as per the following formula:

So, the value of an MLA’s vote is higher in a more populous state compared to a state with less population.

This is proportional representation.

The total value of votes of all MLAs taken together across the country is 5,49,495.

This includes the total vote value of MLAs of Jammu and Kashmir. Reportedly, however, the newly formed UT has not been included in the Electoral College for the 2022 Presidential elections.

A President is elected based on a single transferable voting system. In a secret ballot, members of the Electoral College rank candidates in order of their preference.

To determine the winner, the total number of valid votes is divided by 2 and 1 is added to the total.

A candidate with the minimum number of votes is eliminated first. However, the votes cast in his favour are not discarded and instead transferred to the other candidates.

If a candidate reaches the vote quota, he or she is declared the winner. If vote quota is not achieved, then the next candidate with the least number of votes is eliminated and his votes are transferred.