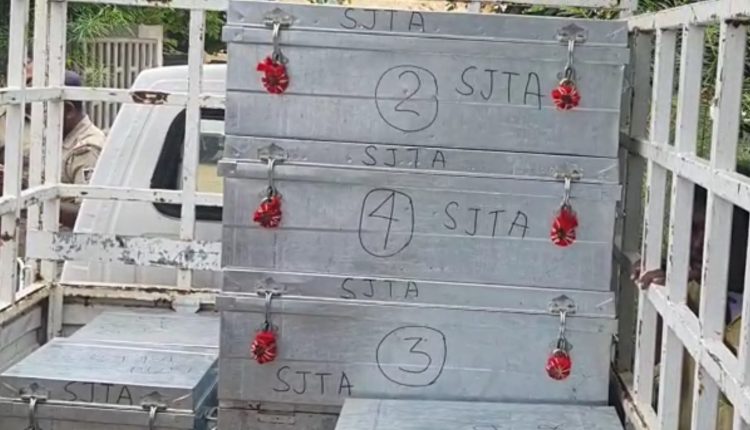 Puri: With Shree Jagannath Temple Administration (SJTA) all set for Rath Yatra on July 1, the process got rolling for covering the last door inside the temple with silver plates on Saturday.

As per the decision taken by the SJTA, 8 main doors of different temples and important places inside the premises would be covered with silver plates. The work on doors of 7 places has already been completed during the Rath Yatra last year. Those are Beharan doors, Jaybijay doors, Satapahacha doors, Bhogamandap, Lakshmi temple, Adinrusingha temple, and Bimala temple.

It was decided that the Kalahata door of sanctum sanctorum of the main temple would be covered with silver plates during the Rath Yatra this year when the three deities – Lrod Jagannath, Lord Balabhadra and Devi Subhadra – would go on their annual sojourn to Mausima temple. Till then, the silver plates were kept sealed inside boxes in safe place.

The silver plates weighing around 500 kg have been kept in 11 boxes in the strong room of district treasury office with permission from the district collector on November 26 last year.

The boxes containing the silver plates were brought out by the SJTA in presence of district administration officials on Saturday. Those were transported to strong room in Niladribhakta Niwas where the main frames of Kalahata doors have already been constructed.

Speaking to media persons, Ajay Jena, administrator, AJTA, said artisans and craftsmen have already arrived in the town and they would start the work after the silver plates reach the workshop. Adequate security arrangement has been made at the strong room as well as the workplace till completion of the works, he added.