Colombo: Protesters who stormed Sri Lankan President Gotabaya Rajapaksa’s official residence claimed to have found millions of rupees inside his mansion, the PTI reported on Sunday quoting a media report.

A video is circulating on social media showing the protesters counting the currency notes found inside the palace. The money was said to be handed over to security units, the Daily Mirror newspaper reported.

Protesters also entered the private residence of Prime Minister Ranil Wickremesinghe and set it on fire on Saturday.

The President’s whereabouts are still not known. His only communication has been with Parliament Speaker Mahinda Yapa Abeywardena, who announced late Saturday night that the President would resign on July 13.

Four ministers have resigned from the Cabinet in the last two days.

Dhammika Perera stepped down as Minister of Investment Promotion on Sunday. He is the fourth minister to resign from the Cabinet after Harin Fernando, Manusha Nanayakkara and Bandula Gunawardena in the last two days.

India said it was “trying to help” Sri Lanka tide over its present economic crisis. Union External Affairs Minister S Jaishankar said that there was “no refugee crisis” as of now.

The US has urged Sri Lanka’s politicians to “work quickly” to achieve long-term solutions to address the people’s anger.

Protesters found cash in the seized residence of Gotabaya #Rajapaksa, the president of #SriLanka. pic.twitter.com/OJ6gzdwCIF

🚨Breaking: Sri Lanka President Gotabaya Rajapaksa flees after he declared the nation as total bankrupt. The moment after that the citizens surrounded the presidential palace and waived black flag along with Sri Lankan🇱🇰. There are no news yet on the whereabouts of President. pic.twitter.com/PGyev8lFxs 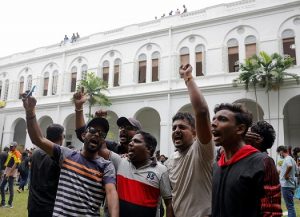 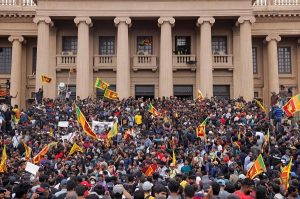 Rain Warning For These Odisha Districts In Next Three Hours