BollywoodFeatured
By OB Bureau On Dec 3, 2021 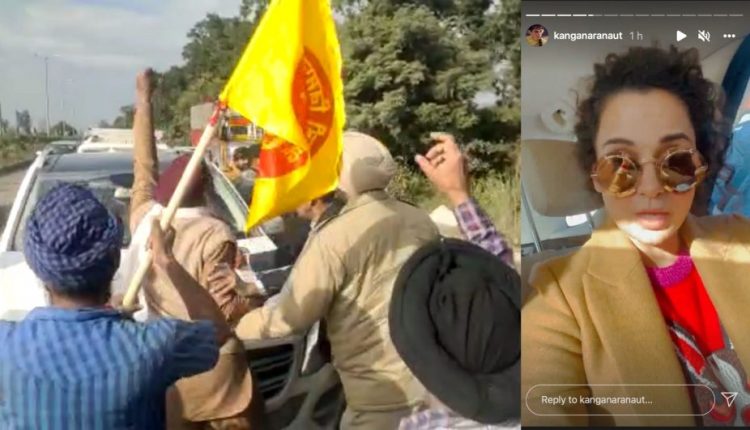 Ropar: You can’t keep Kangana Ranaut out of the headlines. Only this time, the controversy was not of her own making, but was triggered by her earlier statements.

The Bollywood actress was travelling from Himachal when her car was blocked near Punjab’s Ropar by farmers, who protested against her statements on farmers’ protest.

“If police personnel were not present here, lynching would’ve happened, shame on these people,” Kangana says in a video shared in Instagram Stories.

The clip shows her car surrounded by several protesters who could be heard chanting slogans of ‘murdabad (down with)’.

“As I entered Punjab, a mob has attacked my car… They are saying they are farmers,” she wrote.

Watch the video shared by AsianetNews:

WATCH: Actor #KanganaRanaut calls out ‘shocking behaviour by some anti-social elements’ in Punjab; shames people for playing politics with her name that has resulted in this kind of ‘mob lynching’. pic.twitter.com/O4xJ5Q5PSm

Describing the situation as ‘unbelievable’, Kangana further said: “Itni saari police hai phir bhi meri gaadi ko nikalne nahi diya jaa raha hai. Kya main koi politician hoon? Koi party chalati hoon (There are so many police officers here but my car is still not being allowed to leave. Am I politician? Do I run a political party)? What is this behaviour? Unbelievable!”

The agitation against her is apparently because of Kangana’s objection to the repeal of three contentious farm laws, which have been repealed following a year-long protest by farmers. “Sad, shameful, absolutely unfair. If people on the streets have started to make laws and not the chosen government in the Parliament, then even this is a jihadi nation. Congratulations to all who wanted it like this,” Kangana had written recently. She had been criticising the farmers’ protest over the last one year.

In another video, Kangana is seen shaking hands with one of the protesters and telling her that she studied in Punjab. “Love conquers all. Everyone warned me against talking to them but I did,” she said.

Kangana later updated on social media that she was ‘completely safe’ and managed to get out of the ‘sticky situation’. She also thanked the Punjab Police and CRPF.

The agitation comes after Kangana objected to the repeal of the three contentious farm laws and called it ‘shameful’. “Sad, shameful, absolutely unfair. If people on the streets have started to make laws and not the chosen government in the Parliament, then even this is a jihadi nation. Congratulations to all who wanted it like this,” she wrote. Since last year, she has been criticising the farmers’ protest.