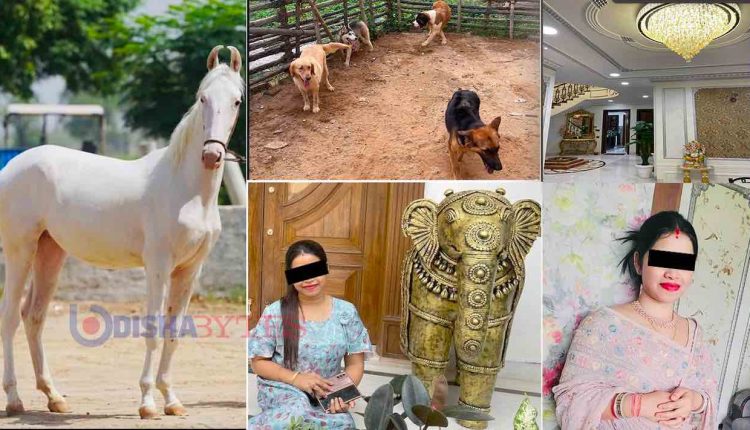 Bhubaneswar: Social media posts have revealed the life of luxury enjoyed by the woman, who was arrested by Commissionerate Police in Odisha capital on Thursday night for allegedly blackmailing and extorting money from high-profile people, including filmmakers, politicians and police officials.

A lawyer by profession, her Facebook profile mentions that she was the founder and managing director of Golden Empress Private Limited along with her husband. They also owned Aditya-villa production house.

Her palatial mansion at Baramunda, in the city has been decked up with costly chandeliers, and antique decorative items, and has big winding stairs, elaborate outdoor seating arrangements and a swimming pool. They own a fleet of vehicles, four pet dogs and a horse. Films were also being shot in the villa, sources said.

It is alleged that she set up her empire in the last five years through blackmailing and extortion. She reportedly befriended people on social media, then sent girls to them and blackmailed them by recording intimate videos with hidden cameras.

Police have seized two pen drives, containing the objectionable videos and two mobile phones from her possession. It is suspected that these contain ‘objectionable’ videos of several filmmakers and politicians. A hotel owner and a jeweller were also among her victims.

Notably, well-known filmmaker Akshay Parija had lodged a complaint with police last month after a woman accused him of sexually exploiting her on the pretext of casting her in movies and helping her start a business. In his complaint with the Nayapalli police, he alleged the woman had been blackmailing him after she invited him to her house for dinner and recorded some objectionable videos with him. He alleged that the girl was threatening to make the video public and demanding Rs 3 crore from him.

Last year, the arrested woman had allegedly blackmailed a politician with a similar modus operandi and demanded Rs 50 lakh from him. As he did not give her the extortion money, she filed a complaint of rape with the Mahila police.

Another film producer also fell victim to the girl who demanded and received Rs 20 lakh from him in May. As she demanded more money, he filed a complaint in this regard at the Khandagiri police station.

Dhamnagar By-Poll: COVID Advisory Of Odisha Govt To Be Followed; Check Other Guidelines