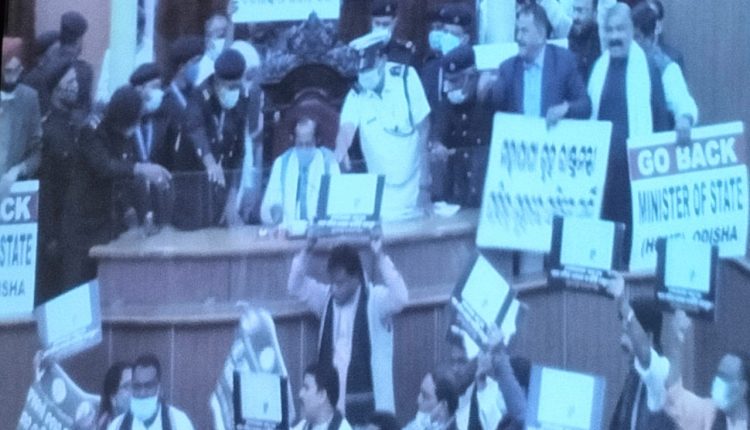 Bhubaneswar: Odisha Assembly Speaker Surjya Narayan Patro on Monday once again adjourned proceedings till 4 pm after Opposition MLAs trooped into the Well of the House and created ruckus demanding the dismissal of Minister of State for Home Dibya Shankar Mishra.

The House has seen repeated adjournments since the Winter Session began on December 1 with the Opposition disrupting proceedings. The House has not met even for an hour since December 1.

On Monday, Congress MLA Taraprasad Bahinipati, who last week arrived dressed as a priest and sprinkled holy water in the House as he claimed Mishra’s presence in the Assembly had made it “impure, and party leader Suresh Routray along with other Opposition MLAs trooped into the Well of the House with placards and raised slogans.

“We request the CM to attend the House, discuss the issues with all the parties, sack Minister of State for Home Dibya Shankar Mishra and ensure smooth running of the House,” the Congress MLA said.

The Speaker has so far not called an all-party meeting to discuss repeated adjournments over the Mamita Meher issue.

The Winter Session is likely to be curtailed with the Opposition BJP and Congress not allowing the House to run till their demand for a CBI probe into the Mamita Meher murder case and dismissal of Mishra is met.

Sources said the House is likely to be adjourned after the Appropriation Bill for the first Supplementary Budget is passed on December 10.

Monday was reserved for official business, while discussion on demand for grants of different departments is scheduled on December 7, 8 and 9.

The BJP and Congress have said that the House will not be allowed to run despite a video statement by Chief Minister Naveen Patnaik on the Mamita Meher case.

Deputy leader of BJP Legislature Party Bishnu Charan Sethi said that the CM had ignored their demand for a CBI probe into the case.

Leader of Congress Legislature Party Narasingha Mishra said that the Speaker was yet to call a meeting to resolve the issue. Countering the CM’s statement that the Opposition was politicising the issue, Mishra said the party wants a discussion.

Puri Man With Comorbidities Dies Of COVID In Odisha