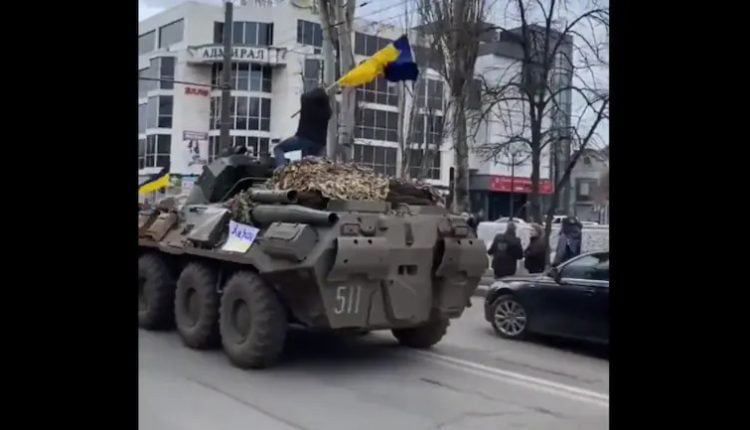 Kyiv: Ukraine continues to be heavily bombarded by Russian forces, but residents of the eastern European country are getting kudos from all around the globe for their resilience and never-say-die attitude in resisting the enemy.

A video which is circulating on social media captures that stubborn spirit aptly.

A Ukrainian man is seen climbing onto a Russian tank with his national flag. As people cheer, the man waves the Ukrainian flag.

Nearly 1.5 million people have fled the war-hit country, while hundreds of civilians have died, including an Indian student.

Russia, on Monday, declared a temporary ceasefire in Kyiv, Kharkiv, Sumy and Mariupol to allow civilians a safe passage out of Ukraine.

Ukraine President Volodymyr Zelenskyy has urged the West to put more sanctions in place against Russia.

Zelensky criticised Western leaders for not responding to Russian Defense ministry’s announcement that it would strike Ukraine’s military-industrial complex.

“I didn’t hear even a single world leader react to this,” Zelensky said. “The audacity of the aggressor is a clear signal to the West that the sanctions imposed on Russia are not sufficient.”