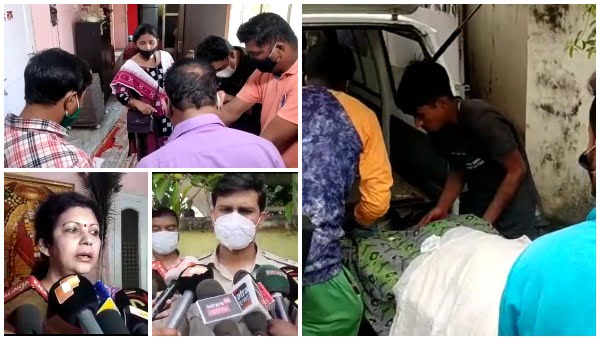 Cuttack: The Millennium City woke up to a high-profile murder on Wednesday with the scion of Kanika Royal family allegedly hacking his mother to death at their residence at Kanika Chhak here.

The deceased, identified as Paresh Kumari Devi (75), was the granddaughter-in-law of the erstwhile King of Kanika, Rajendra Narayan Bhanjadeo.

The accused, Soumendra Narayan Bhanjadeo, has been detained by Bidanasi police for interrogation.

According to sources, the accused attacked his mother with a sharp weapon after a heated exchange of words this morning. She died on the spot.

Speaking to the media, the daughter of the deceased, Jayanti Samantray, said that her mother used to stay downstairs with his brother. “On Saturday, she complained that he was trying to strangulate her to death and I asked her to shift upstairs. She had been staying with me since then,” she said.

She further said that she woke up to loud noises this morning and saw her brother attacking her mother on CCTV. She immediately called the police.

“My mother had approached the police earlier too but they refused to register a complaint stating that it had become a regular affair in the family,” she said.

Gopala is a psychiatric patient and has three wives, she said, adding that he blamed his mother for ruining his life.

Cuttack DCP Prateek Singh said that the accused had attacked his mother with different weapons. “The mother and son would fight often and this was not the first instance. An investigation will reveal the reason behind today’s attack,” he said.

A scientific team has reached the spot of crime to collect evidence. The body has been sent for postmortem, the sources added.