In the first round of counting, Murmu secured 540 votes of MPs, while Sinha received 208 votes, out of the total 776. Total value of valid votes stood at 5,23,600. After the second round, Murmu was leading with a huge margin of 1,349 votes with Sinha was trailing behind with 543. 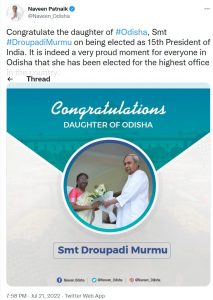 Odisha chief minister Naveen Patnaik has congratulated Murmu on her election. “Congratulate the daughter of Odisha, Smt Droupadi Murmu on being elected as 15th President of India. It is indeed a very proud moment for everyone in Odisha that she has been elected for the highest office in the country,” Naveen said in a tweet.

Know What Droupadi Murmu Said On Her Election As President