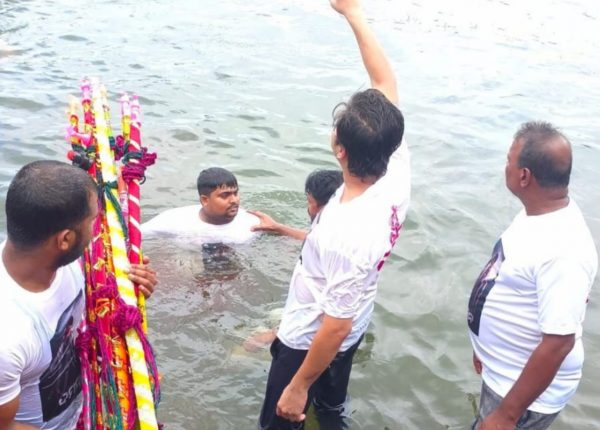 Bhubaneswar: Ollywood actor Babushaan Mohanty performed Bol Bam Yatra with the entire team of his forthcoming film ‘Daman’ in the Old Town area of Bhubaneswar on the first Monday of Sravan month.

The actor was also joined by his fan club members, who were seen sporting ‘Daman’ t-shirts.

Babushaan is essaying the role of a doctor working in the Maoist-hit Malkangiri district of Odisha in the film based on a true story. “The subject touched my heart. The important thing about this project, which attracted me, is that it is about helping others. I could connect myself with the emotions involved in the story. The movie will bring in a revolution in the Ollywood Industry I feel. I am seeking everyone’s blessings and I hope that my audience accepts me in this new avatar,” he said.

Produced by Deependra Samal under the banner J P Motion Pictures, Daman is directed by the duo Vishal Mourya and Debiprasad Lenka. Babushaan had visited Pranab Prakash Das recently along with the team of ‘Daman’ to show him the trailer of the movie, which is slated to release in the theatres across Odisha on September 30.

According to updates from Signature 24 Productions Team, which is looking after the promotions of the movie, Babushaan will be seen travelling with the team of ‘Daman’ to promote this movie across India for Prabashi Odia denizens starting with Chennai on July 24 where a special screening of the trailer is slated for the members of Utkal Association of Madras.

The annual pilgrimage is being held this year between July 14-26, after a gap of two years owing to the COVID pandemic. Adequate police and administrative arrangements have been put in place to ensure smooth darshan of devotees at major Shiva shrines across the state.

During this auspicious month, devotees visit Lingaraj temple in Bhubaneswar, Lokanath temple in Puri, Dhabaleswar temple in Athagarh, Kapilash temple in Dhenkanal, Gupteswar temple in Koraput and Balangir’s Harishankar temple among others to seek blessings of the Lord.