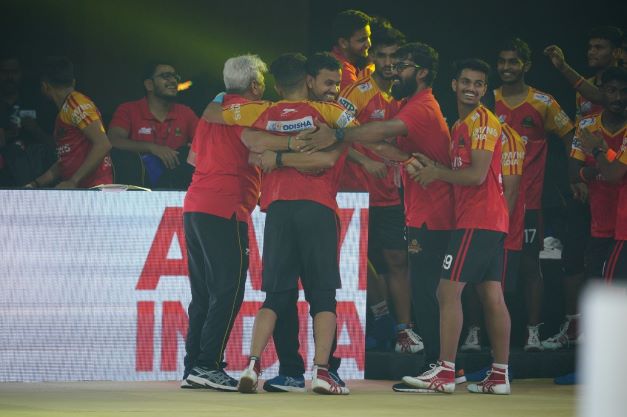 Bhubaneswar: Chief Minister Naveen Patnaik congratulated the Odisha Juggernauts team members during his interaction with them on Saturday.

The Juggernauts outplayed Gujarat Giants in Qualifier 1 at Pune on Friday night to storm into the Ultimate Kho Kho League final.

The Odisha CM lauded the coaches and players of the state-owned team for their brilliant performance so far and encouraged them to keep up the good work in the final – against the winners of Saturday night’s Qualifier 2 between Gujarat Giants and Telugu Yoddhas.

Soon after Juggernauts had overcome Gujarat on Friday, Naveen took to Twitter to congratulate the team.

“Congratulate @od_juggernauts on qualifying for the final of @ultimatekhokho by defeating @GujaratGiants 57-43. May they continue their winning streak and bring glory for #Odisha. Wish them all the best. #KhoOdishaKho #OdishaForSports,” tweeted Naveen who has been followingtheir matches regularly.

Thrilled to interact with the CM through video conference, the Juggernauts coaches and players thanked Naveen for the support that he and the Odisha government have been extending them.

The team’s Head coach Ashwani Kumar Sharma, co-captain Dipesh Vijay More and Jagannatha Murmu promised the CM to give their best performance in Sunday’s final and return to Bhubaneswar with the winner’s trophy.