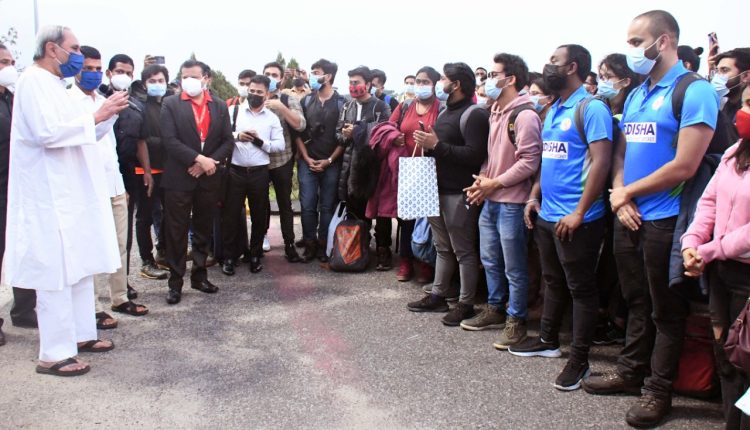 Bhubaneswar: Seventy-seven students, who were evacuated from war-torn Ukraine, arrived in Bhubaneswar at 5.30 pm on Monday evening in a special flight arranged by the Odisha government.

Chief Minister Naveen Patnaik was at Biju Patnaik International Airport to receive the students, who had safely returned home. He also interacted with them there. He assured them that efforts would be made to allow them to continue their education.

The CMO office had earlier tweeted about 77 students boarding an Air Asia flight for Bhubaneswar from New Delhi at 3.45 pm.

State Resident Commissioner in New Delhi Ravi Kant told Odisha Bytes that the flight has been being arranged by the government only for the students to facilitate their early return to home.

A total of 44 students from Odisha had reached New Delhi on Sunday, taking the total to 305 since Operation Ganga began on February 26. A large group of 70 students reached Romania from Posecochyn on Sunday and are waiting to board a flight back home, the TNIE reported.

The Odisha students, who are stuck in Sumy, are also getting ready to be evacuated amid the ceasefire declaration by Russia.

Notably, the CM had spoken to the first batch of Odia students on their arrival in New Delhi on February 28 via video conferencing.

The students had apprised the Odisha government about the lack of transportation facilities in the war-ravaged country and stranded Odias in Kharkiv region. Following this, the government arranged for special buses to shift the students, who had walked to the bordering areas, to the neighbouring countries with the help of some local organisations.

Also Read: [Watch] We Are So Relieved To Have You Back, Odisha CM Tells Students; 500 More Still Stuck In Ukraine

While 25 students, stranded in Kharkiv and Pesochyn, were evacuated on March 4, another 65 took a special bus to the Ukrainian border through Lviv, which is 80 km away from Poland, the following day.

The government had then informed about 199 Odia students having returned from Ukraine.

If media reports are belives, at least 500 students from Odisha were in Ukraine when Russia launched the military operation two weeks ago. Among them, 400 had moved to safer zones and 380 crossed the borders from Ukraine into Poland, Romania, Hungary and Slovakia by March 4.

‘Not Without My Jaguar & Panther,’ Indian Doc Refuses To Leave Ukraine Without Pets!