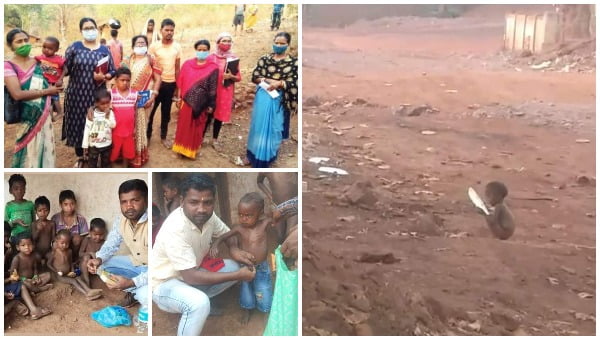 Sundargarh: A grim picture of hunger from Koida tehsil in resource-rich Sundargarh district has shaken the collective conscience of Odisha.

In a video that has gone viral, a hunger-stricken two-and-a-half-year-old child can be seen licking leftover food from a plate disposed of after a wedding at a village.

The malnourished kid has been identified as Manoranjan, a resident of Ganua village. He has two elder siblings, Ranjan (7) and Mamali (5).

A social activist, Badal Barik, was the first to reach the village with biscuits and clothes for the siblings. “The three children lost their mother around seven to eight months ago. Their father, Ravan Munda, barely takes care of them. He wastes all his money on liquor and is irregular at the mines, where he is engaged as a coolie,” Barik said.

It took the administration almost five days to respond to the situation, he added.

The three children were handed over to Rourkela Childline officials lead by Ambar Alam on Friday evening.

Earlier in the day, Koida BDO Pallavirani Raj along with CDPO Josepha Ekka and a team of doctors reached the spot. The doctors conducted a check-up of the three children, who were also provided with nutritious food.

When contacted, Collector Nikhil Pavan Kalyan said that he was busy with video conferencing and would call back later. Odisha Bytes is waiting for his response on the issue.

Why Are People Vulnerable In Odisha’s Elephant-Human Conflict During Summer?