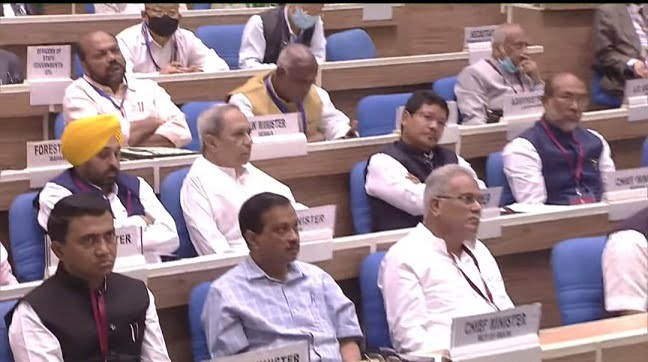 “We need to encourage local languages in courts. This will not only increase the confidence of common citizens in the justice system but they will feel more connected to it,” Modi said, addressing the joint conference of CMs and Chief Justices of High Courts at Vigyan Bhawan here on Saturday.

The PM also urged CMs to repeal outdated laws. “In 2015, we identified about 1,800 laws which had become irrelevant. Out of these, 1,450 such laws of the Centre were abolished. But, only 75 such laws have been abolished by the states,” he said.

Addressing the conference, Modi said, “In our country, while the role of the judiciary is that of the guardian of the Constitution, the legislature represents the aspirations of the citizens. I believe that with this confluence of these two sections of the Constitution… this balance will prepare the roadmap for an effective and time-bound judicial system in the country.”

“In 2047, when the country will complete 100 years of its Independence, then what kind of judicial system would we like to see in the country? How do we make our judicial system so capable that it can fulfill the aspirations of India of 2047… these questions should be our priority today,” he added.

This is the second time in a week that Modi is addressing the chief ministers.

No Change In Time Gap For ‘Precaution Dose’ Of COVID Vaccine