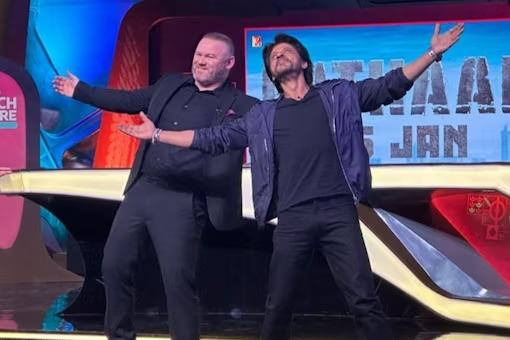 New Delhi: Shah Rukh Khan was at the FIFA 2022 World Cup finals on Sunday to promote his film ‘Pathaan’. Ahead of Argentina vs France match, which the former won, the Badshah of Bollywood joined legendary footballer Wayne Rooney to discuss all things football and ‘Pathaan’. During the chat, SRK told Rooney that his character in ‘Pathaan’ is based on the ace footballer, adding that he came to the FIFA 2022 finals to just ‘sit next to Rooney’. He also revealed that he has been a fan of his work.

“Whatever I know of football, I used to watch football with my mom when television came into India, and post that it was always Manchester United, Mr Wayne Rooney, so my education of soccer is from Mr Rooney. So big fan, I have only come here not to promote the film, or talk about football, but just to sit next to Rooney,” he said, according to a News18 report.

Speaking about Pathaan, the superstar also revealed that he always wanted to star in an out-and-out action film and he finally got a chance to do it with ‘Pathaan’. “I look too sweet to do an action film,” he said, before adding, “(I was) dying to do a film wearing a white shirt with blood, shoot guns and be the badass guy.”

During the chat, Shah Rukh and Rooney got a chance to ask each other questions. Rooney asked how Bollywood actors look so young. He joked that like Aussies, Bollywood actors also eat rice and chicken. However, he immediately clarifies that he is joking. In return, Shah Rukh jokingly asked Rooney how footballers like Argentina Lionel Messi are still young. King Khan added that he is a fan of Messi and was all praise for him.

Before he could leave, Shah Rukh Khan taught Rooney his signature arm pose. The actor showed him the trick but reminded everyone as well that no one can do it better than him!

Turtles Being Smuggled At District Fisheries Office In Odisha’s Paralakhemundi