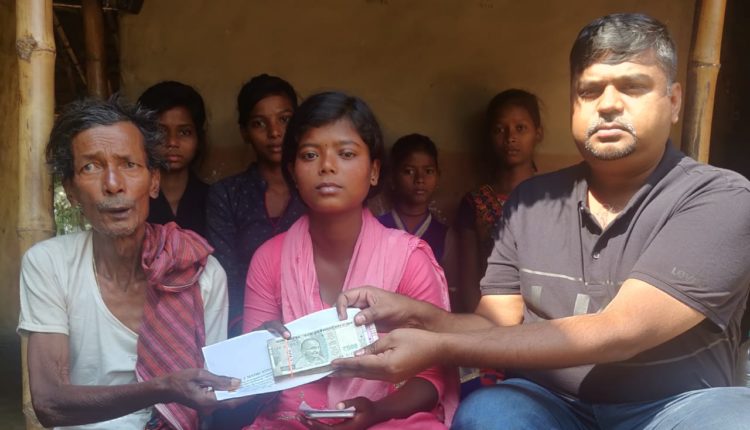 Bhubaneswar: A few days ago, Rojy Behera could be seen carrying mounds of earth on her head as a daily wager in Odisha’s Puri district.

The 20-year-old had to take up the task for a mere Rs 207 per day under Mahatma Gandhi National Rural Employment Guarantee Scheme (MNREGS) at Sadangoi in Pipili block to pay for her pending dues (Rs 40,000) at a private engineering college.

Rojy was falling short of Rs 20,000. However, the institute where she was pursuing a Diploma in Civil Engineering, was not ready to release her certificate unless she paid the remaining amount.

This caught the media’s attention and had people calling for crowdsourcing to help the hapless girl.

Dr DNV Senthilkumar S, the DMK MP from Dharmapuri in Tamil Nadu, spotted one post on Twitter and enquired about the girl from the number mentioned on it.

He spoke to Rojy on February 5 evening and took a flight to Bhubaneswar from New Delhi the next morning. He then hired a taxi to Puri and handed over Rs 1 lakh in cash to help her realise her dreams of pursuing higher studies.

Speaking to Odisha Bytes, the MP said that he helped the girl in his personal capacity. “The girl was keen to pursue higher studies and money should never be an impediment in such cases. By studying and getting a job, she can help her family of seven and also her community,” he said.

He has also assured Rojy of help in the future if needed.

Rojy has five sisters. One of her sisters is pursuing a B-tech degree and the other is in Class XII. Her two youngest sisters are studying in Class VII and Class V. Her parents are daily wagers, trying to make ends meet while ensuring a good education for their daughters.

Having got the certificate from the college now after the intervention of Mo Parivar Convenor Arup Patnaik, who also provided her with Rs 30,000 from the Chief Minister’s Relief Fund, the 20-year-old is hopeful of becoming an engineer after enrolling for B Tech in Civil Engineering. She is now readying to prepare for the entrance test.

“The MP has set an example for all people’s representatives on how they can make small changes in the lives of people,” said the sarpanch of Rojy’s village, Pradyumna Parida.

He also informed that Jatra artiste Rani Panda had transferred Rs 25,000 to Rojy’s account after she got to know about her plight from a news telecast on a local channel.

On Monday, she along with the sarpanch visited the office of Puri Collector Samarth Verma, who assured her of a job.

“We have requested the Housing and Urban Development Department for her engagement. She has already received her certificate and financial help. We will also help her with her studies if she is more keen on that,” he said.

“My parents are growing old and my father is the sole breadwinner. A job will help me take care of my family and I can pursue my studies alongside,” Rojy added.

Odisha Cold Wave: No Respite From Chill Till Next Week, Says IMD