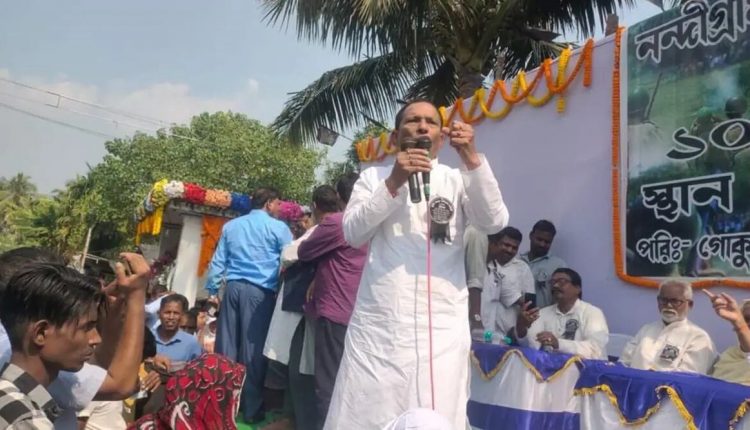 New Delhi: A Minister from the Trinamool Congress, Akhil Giri, has come under severe criticism from the BJP over his comments on President Droupadi Murmu.

In a video that has gone viral, the Minister for Correctional Administration, while addressing people in Nandigram on Thursday, is seen saying: “He (Suvendu Adhikari) said that I am not good-looking. How beautiful is he? We don’t judge anyone by their appearance. We respect the office of the President (of India). But how does our President look?” Akhil Giri asked a crowd of people.

Reacting to this statement, BJP IT cell chief Amit Malviya said: “Akhil Giri, minister in Mamata Banerjee’s cabinet, insults the President, says, ‘We don’t care about looks. But how does your President look?’ Mamata Banerjee has always been anti-tribals, didn’t support President Murmu for the office and now this. Shameful level of discourse.”

BJP MP Saumitra Khan also wrote to the National Commission for Women, requesting them to “immediately arrest” Akhil Giri and take appropriate action against him. He also asked them to “try to dismiss him from the MLA’s post” over his objectionable comments, The Indian Express reported.

The BJP’s West Bengal unit has also called for a statewide protest on Saturday against the comments and demanded Giri’s resignation, the report added. “President Droupadi Murmu, hails from the Tribal community. Akhil Giri, TMC Minister of Correctional Homes made objectionable comments about her in the presence of Shashi Panja, another minister from the women’s welfare department Mamata Banerjee and TMC are anti-tribal,” the BJP’s Bengal unit tweeted.

State BJP president Sukanta Majumdar, too, took a dig at the Mamata Banerjee-led government. “CM Mamata Banerjee has always been Anti Tribal. His minister Akhil Giri took it further and insulted the president on her look. Why she and her govt hate tribals so much?” Majumdar wrote on Twitter.

#WATCH | “We don’t judge anyone by their appearance, we respect the office of the President (of India). But how does our President look?,” says West Bengal Minister and TMC leader Akhil Giri in Nandigram (11.11.2022) pic.twitter.com/UcGKbGqc7p