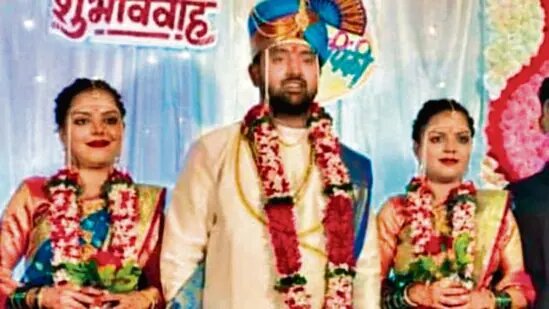 New Delhi: They may be a happy trio couple but their marriage has not gone done well. Neither in society nor in the court of law.

Rinky and Pinky, twin sisters from Mumbai made no secret of their marriage to the same man but have ended up paying a heavy price for it. It is now a non-cognisable offence under Section 494. The wedding ceremony was held in Maharashtra’s Solapur district, the videos of which went viral shocking social media users.

According to a PTI report, the twin sisters are 36 years old and agreed to marry Atul and both their families agreed to this arrangement. Reports said Rinky, Pinky and Atul have been living together in the same house since childhood and after the death of girls’ father, Atul helped the family.

As seen in the video, it was no secret wedding. The names of the brides and the groom were written prominently at the place where the event was held. In the clipping from the Jaimala ceremony, many people can be seen cheering for the twin sisters who tried to garland the groom who was on the shoulders of a few men as it happens in Hindu wedding rituals. The twin sisters attempted to garland Atul at the same time and failed in their first attempt. Then they put the jaimala on him one by one.