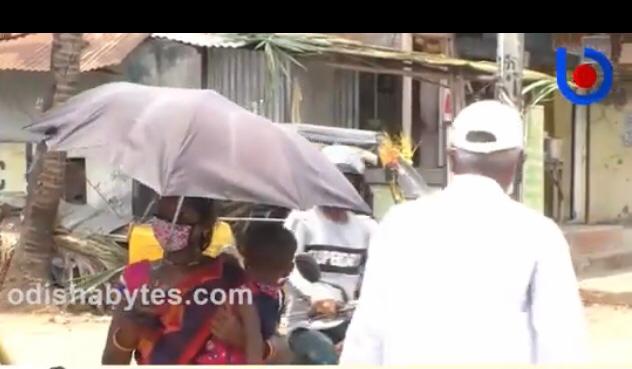 Malkangiri: With the sun beating down relentlessly, the residents of Malkangiri are finding it hard to stay out in the open. As the day progresses, staying back home to protect themselves from the heat too does not work.

The unbearable heat and undeclared power cuts have made life miserable for the people of Malkangiri town. The town has been recording temperature of 40 degree Celsius and above for the last few days.

On Wednesday, Malkangiri recorded 40.5 degree Celsius while it was 41 on April 19.

While office-goers have no choice and students escape the heat with schools and colleges closed due to COVID-19, those running small-time business and daily wagers are having to bear the brunt.

“There is no facility of drinking water on the roads. We also have frequent power cuts. The administration should take steps to provide drinking water along the road during summer by open Jal Chhatra. This will provide relief for people, particularly the poor,” said Dilu Panda, a local.

The administration is yet to open Jal Chhatra (free water kiosk) in rural and urban areas of the district even as public taps and hand pumps in some areas have already dried up.

“Water level in ponds and wells has declined and people in some areas are struggling for a bucket-full. As this is just the beginning of  summer, the district administration should take steps to arrange drinking water for people as well as street animals and birds. People venturing out also fear sunstroke,” said Keshav Nayak, another resident.

Meanwhile, the rise in temperature in early summer has benefitted the fruit vendors. To get relief and quench their thirst, people prefer natural summer drinks like tender coconut water and sugarcane juice.

The cucumber and watermelon sellers too are earning quick bucks besides the ice-cream vendors.

Bollywood Celebs Face Flak For Posting Photos Holidays Abroad, Know Those Who Have Slammed It

Lockdown Blues: Stay Indoors And Spin The Summer With These…

Scorching Odisha Summer: Have These Cool Sips To Beat The…