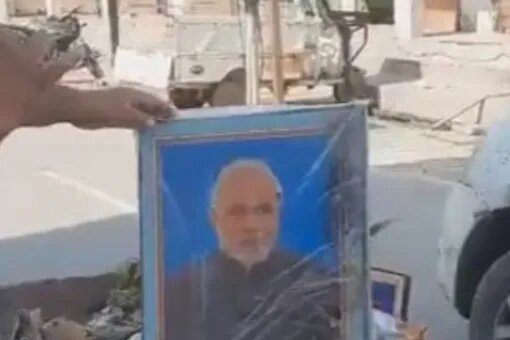 New Delhi: A municipal corporation employee was laid off from his job after he was seen pushing a garbage cart containing the framed photos of Prime Minister Narendra Modi and Chief Minister Yogi Adityanath in UP’s Mathura.

A few devotees from Rajasthan’s Alwar spotted the man carrying the photos framed amidst a pile of garbage, filmed and subsequently shared the incident on social media.

As per reports, the concerned man was sacked from work after the video of the incident went viral over social media. “I have nothing to do with this. It was in the trash, so, I put them in my cart,” he can be heard saying when cornered by a group of men about the photos.
The employee is also seen pulling out a photo of APJ Abdul Kalam from the pile of garbage. The men who discovered the incident were later seen washing the photos. “We are taking these photos with us to Alwar. Modi ji and Yogi ji are the soul of this country,” they said.

A municipal contractual worker has been terminated by Mathura Municipal corporation for carrying discarded photographs of Adityanath and Narendra Modi in a garbage cart.
The worker says he found the photos in a garbage dump. pic.twitter.com/xEUxCJYwRW

Satyendra Kumar Tiwari, additional municipal commissioner, Nagar Nigam Mathura-Vrindavan was quoted as saying by News18, “The man put the photos in his cart unknowingly. An action has been taken against him and his job has been terminated with immediate effect,”