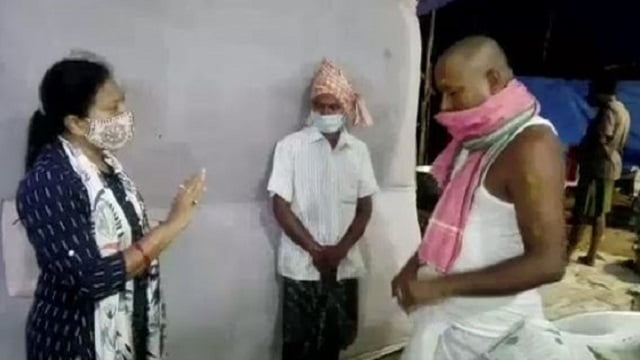 Balasore: A woman Tehsildar Anamika Singh was reportedly beaten up by some locals during a raid on a house where 11th day death rituals were being organised at Hinjili village in Balasore district on Wednesday night.

One Ramesh Rout of the village organised the function in memory of one Himani Rout of the family who passed away of COVID-19 last month.

Though he had got permission for inviting 20 people only, Ramesh invited around 100 people and prepared food for 100 too. The State government had limited number of persons to 20 for such functions.

On getting information, local Tehsildar Singh raided the house and asked the family to end the feast as the area was crowded and invitees exceeded the government set norms.

But, instead of listening to the government official, Singh was abused and attacked with sticks by the locals as well as family members. This took place for nearly 2 hours from 7.30 pm on Wednesday when the tehsildar raided the place.

It was learnt that the three persons were released within 24 hours of detention. On being questioned, the IIC claimed that one of them was corona positive. However, the IIC had not proof of the persons being corona infected and said that detained person was on corona medication.

Meanwhile, the tehsildar has threatened to stage dharna if action was not taken against the family as well as the police for serious violation of COVID protocol.

Over 71% Odisha Students Had No Access To Smartphones During Lockdown In 2020,…