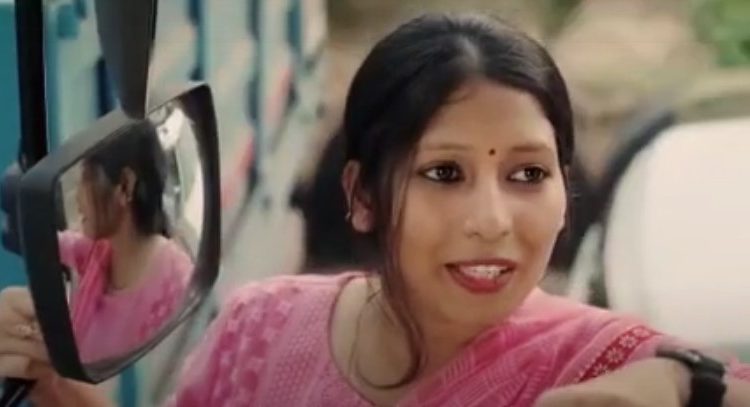 Bhubaneswar: Even as women driving scooty and cars on Odisha roads is no more rare sight, it is high time they take to driving commercial vehicles in a big way to break the men’s dominance in this field.

In order to encourage and lure the fair sex to the supposedly strenuous work, the Odisha State Transport Department has come up with a two-minute video campaign on International Women’s Day. The video shows how a young woman, driving a scooty, comes to the rescue of a truck driver.

As the truck driver gets stuck in a traffic jam and is unable to navigate, the woman sits behind the wheel and manoeuvres the heavy vehicle out of the jam.

In the in-houses video, the role of the protagonist is played by Puja Barik of Cuttack. She is a trainer at Driver Training Institute at Chhatia in Cuttack district.

“The video has been created by a team of officers of the department. Most importantly, all the actors in the video are from our own training institute,” said Arun Bothra, CMD, Odisha State Road Transport Corporation.

Speaking to Odisha Bytes, Puja said though she did not have any previous acting experience, she did not face any problem while shooting the video.

In her opinion, no job that can be done by men is too tough for women. “Women do not have to prove themselves in any field. They only have to be motivated enough to face any challenge. In fact, the video aims at encouraging the women to come forward and take up the jobs that are considered as men’s monopoly,” said 25-year-old Puja.

In her message on Women’s Day, she said, “Whenever a woman drives a vehicle, she gets uncomfortable looks from the men. I want the women not to feel conscious about it and live their dreams fearlessly.”

A Street Named After Zelensky?