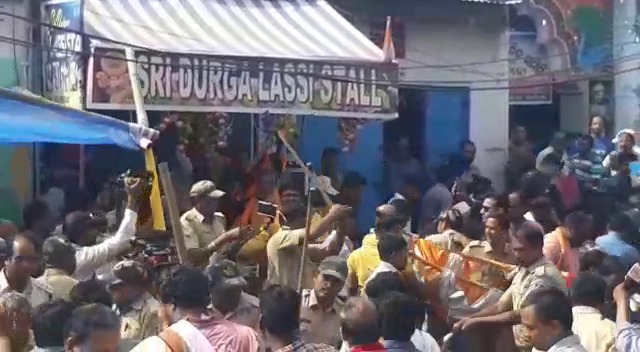 According to sources, Humanist and Rationalist Organisation (HRO) of Ganjam district had organised a community feast near Berhampur City High School terming the advice of astrologers to avoid eating cooked food during lunar eclipse as unscientific and wrong.

They said the feast was organised to make people aware of scientific thinking and prevent them from following superstitious beliefs and blind faiths.

However, some organisations strongly opposed the programme describing the holding of community feast during lunar eclipse as anti-Hindu.

A large number of activists of Brahmin Samaj, Vishwa Hindu Parishad (VHP), Bajrang Dal and other organisations went in a procession and stormed the venue of the feast and hurled cow dung on the rationalists.

The protesters then attempted to barge into the venue, damaged the tent erected for the programme and ransacked furniture and other materials, sources said, adding that a scuffle broke out between the two groups after the rationalists retaliated.

In a bid to bring the situation under control, a large number of police personnel rushed to the site and resorted to baton charge in order to disperse the protesters. Several people were also taken into custody.

Additional Superintendent of Police Asim Panda and SDPO Rajiv Lochan Panda held discussion with members of both the groups in a bid to restore normalcy.

The situation is now under control but tense. Efforts are being made to restore complete normalcy for which tight security measures have been taken, said the ASP.