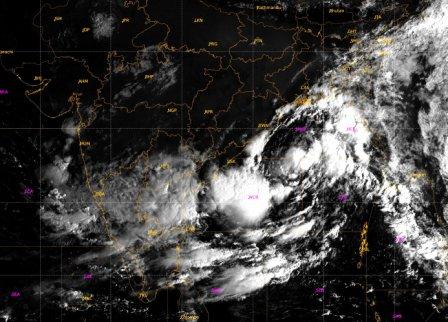 Bhubaneswar: The India Meteorological Department (IMD) on Wednesday sounded heavy rainfall warning for coastal districts of Odisha under the influence of a well-marked low pressure over the Bay of Bengal.

Apart from the coastal districts, there will be light to moderate rainfall in the remaining parts of the state during this period. The rainfall will continue for three days till October 24, the bulletin added.

Due to the inclement weather, the IMD has advised the fishermen not to venture into deep sea area of the west-central Bay of Bengal till October 23 as strong surface wind speed reaching 40-50 kmph will make the sea condition rough to very rough.

In view of the heavy rainfall, IMD has issued yellow and orange warnings for the following districts.

October 21
(Yellow warning)
Heavy rainfall at one or two places in Malkangiri, Koraput and Ganjam.

October 23
(Orange warning)
Heavy to very heavy rainfall at one or two places in Ganjam and Puri.