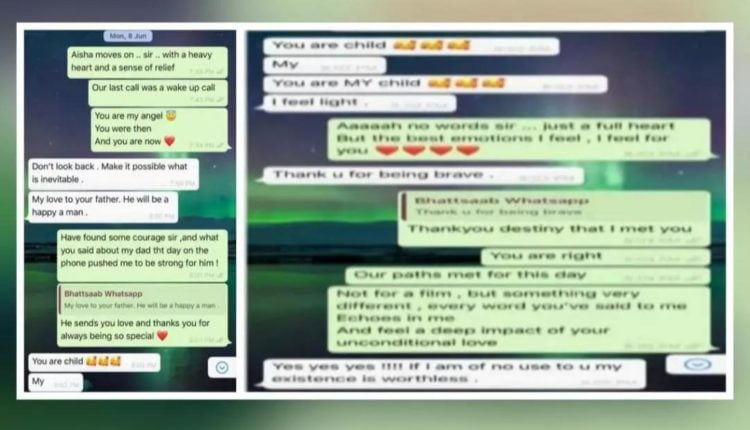 The chats hint that Rhea’s father and Bhatt were both not happy about her relationship with Sushant. Rhea is referred to as “Ayesha”, her character in the film “Jalebi”.

“Aisha moves on..sir..with a heavy heart and sense of relief,” Rhea wrote. “Our last call was a wake-up call.” The message that followed read, “You are my angel You were then And you are now,” she added.

Bhatt responded by saying, “Don’t look back. Make it possible what is inevitable”, and “My love to your father. He will be a happy man.”

To this, Rhea replied, “Have found some courage, and what you said about my dad tht day on the phone pushed me to be strong for him. He sends you love and thanks you for always being so special.”

Bhatt replied, “You are my child. I feel light”.

To which, Rhea responded by saying, “Aaaah no words sir. The best emotions i feel i feel for u.”

In reply, Bhatt wrote, “Thank u for being brave.”

To this, Rhea stated in separate messages: “Thank you destiny that I met you”; “Yogu (sic) are right”, “Our path met for this day”; and “Not for a film, but something very different, every word you have said to me Echoes in me and feel a deep impact of your unconditional love”.

Rhea ended by saying, “I love you my best man”; and “Will make you proud”.

Bhatt replied with emojis of folded hands, “You have. Truly. It takes guts to do what you did. Don’t look back.”