When Does Life Begin For Indian Housewives? 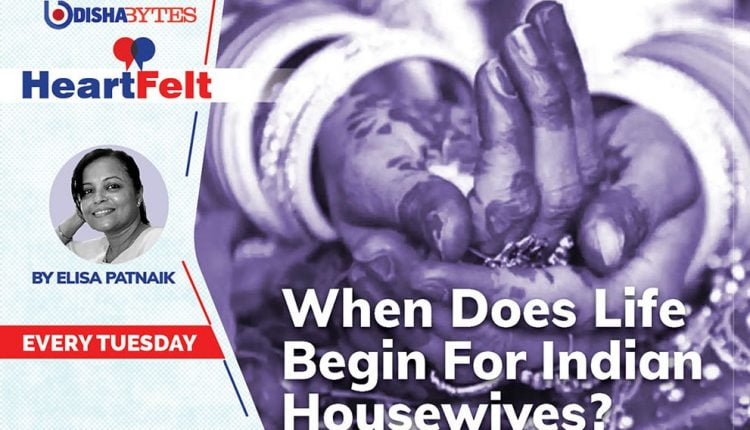 We have seen our own mothers, aunts and other female relatives and acquaintances surrendering the most productive years of their lives anchoring marriages, raising children and families. And one fine day, the women suddenly realise that they have lived more than half of their lives compromising and adjusting for the sake of their families, without fulfilling any of their dreams and aspirations. The feeling of emptiness deepens when children move away to lead their own lives and women sense a yawning identity crisis that usually drives them towards depression. Some determined, brave and fortunate women do rediscover themselves and begin a second innings in their late 40s or mid-50s.

I have often pondered about this and how talented, intelligent, and efficient women choose to or are forced to neglect their interests and how they let go of their capabilities, qualifications, desires, and ambitions at the altar of marriage and family. It struck me harder when the middle-aged housewife contestant, Geeta Singh Gour from Madhya Pradesh expressed a similar thought at the popular game show Kaun Banega Crorepati. I was both happy and impressed seeing the inspiring show put by Geeta, not only winning ₹1 crore in the game but for persisting for the past 17 years to be on the show.

Speaking about her journey, Geeta said that she quit studies soon after getting married at an early age and it was only in her 30s that she decided to pursue a law degree. She is now 53 and craved for her own identity.  She shared that this is the “second inning” of her life and she wishes to live for herself – learn cycling as she doesn’t know how to cycle, taking up farming and learning English.

Many married Indian women share such lives and they are not necessarily ‘unhappy’ and have loving families and children. While some of them have willingly decided not to pursue their interests and careers, others have been compelled either by families or circumstances to do so. A few simmer and rage, others shed silent tears but most of them just lose count of the years that fly by nurturing their families and keeping a household securely running.

Running a typical Indian household is not easy. There are at least three meals to be prepared each day, tiffin boxes to be packed, spouse to be looked after, children to be tended, parents and in-laws to be cared for, the house to be cleaned, clothes to be washed, supplies to be bought, domestic helps to be managed, guests to be looked after, social events to attend, religious functions to organise etc. And typically, women are conditioned and tend to become the pivot around which all domestic activities revolves in the house.

Marriage is a watershed in a couple’s life, bringing in lifestyle changes and new responsibilities for both the partners. However, for most Indian women, the changes post-marriage is immense, when they come to their new homes to live with their husbands, adapting to a new family, environment, and customs. The underlying patriarchy is most evident in Indian marriages and families when the new bride, the wife or the daughter-in-law is expected to follow and practice a new set of prescribed behaviours.

It is even tougher if it’s a typical traditional Indian joint family with conventional responsibilities, expectations, and norms. Many women go through complete personality changes with hardly any trace of their former carefree selves. The Great Indian Kitchen, the critically acclaimed Malayalam film, aptly portrayed the prevalent patriarchy in Indian marriages where the newly-married wife is subjected to unending domestic drudgery, discouraged from taking up a job without the permission of the male family members and frequently humiliated by her husband and family members for not dutifully following the customary practices.

Women are not only judged on their ability to keep the family happy and united but also on their domestic efficiency and housekeeping skills. They often fulfil these social expectations at the cost of their own aspirations, personal interests, education, and career. They lose touch with their friends, neglect their health and mental well-being, ignore their qualifications in the quest for being a star homemaker, responsible mother, loving wife, and the ever-present family member catering to the needs of one and all. The first one to wake up and the last to go to bed.

And the social and cultural conditioning is so deep that women themselves feel guilty for not being ‘responsible or adjusting’ enough. Most Indian women think it is their foremost duty to take care of the house and children and also flaunt their efficiency as a homemaker with pride. Of course, there is nothing demeaning about it, rather it’s one of the most difficult of jobs.

But what is disconcerting is how millions of housewives willingly and happily take up the role of unpaid domestic help without being valued and acknowledged enough and losing their own identities in the bargain.

It’s not just housework that women are caught up with. In some families, women are prevented by husbands or in-laws from taking up jobs, pursuing their interests, meeting specific people, wearing certain clothes, or going out alone. Over the years, women end up giving up their earlier interests, aspirations and also individualities. As a tokenism, some women at a later stage in their lives once free from their domestic responsibilities are asked to attend the family business office to ‘spend’ their time. But it’s often too little too late.

An old friend who is married into a wealthy traditional family narrated how every year during Diwali, the women in the family were gifted lavish jewellery and clothes and when she (an avid reader) requested a bookshelf full of books, she was mocked at. “I was one of my school and college toppers but married early as was the custom in my family. My husband and in-laws are loving too. But I gradually realised all is well as long as I conformed to my prescribed role as a wife, daughter-in-law, and mother. I craved for intellectual discussions, to know more about my husband’s business but was never encouraged to do so,” she shared. And now with additional domestic help, her daughter married and her son busy in the family business, she now has plenty of ‘free’ time at her disposal. “I really don’t know what to do with all this time. I don’t have the confidence to do take up anything new myself.”

It is no surprise many middle-aged married Indian women battle with depression and go through severe identity crises.  Housewives are among the largest groups in India, who die by suicide. The NRCB (2018) points out that housewives constitute 17.1% of all suicides in the Country. As per a Lancet  Study in 2018, more than one third (36.6%) of suicides by women in the world in 2016 were in India – an increase from 25.3% in 1990. The report adds that married women account for the highest proportion of suicide deaths among women in India due to reasons such as – early arranged marriages, young motherhood, low social status, domestic violence, economic dependence and other deeply entrenched patriarchal practices.

Hearteningly, some of the strong, determined, and dynamic middle-aged married women have indeed begun successful second innings, fulfilling their dreams, aspirations, even simple desires like taking charge of their health, going on a holiday with school friends, learning to drive and teaching children of domestic help.

It’s not just women who need to value themselves and develop agency to live their own lives. Support from spouses, children, family members are equally important to initiate this change. We could and should begin from our own homes, regarding women as individuals, breaking patriarchal customs, supporting, encouraging, and enabling them to carve their identities and interests till they fly on their own.