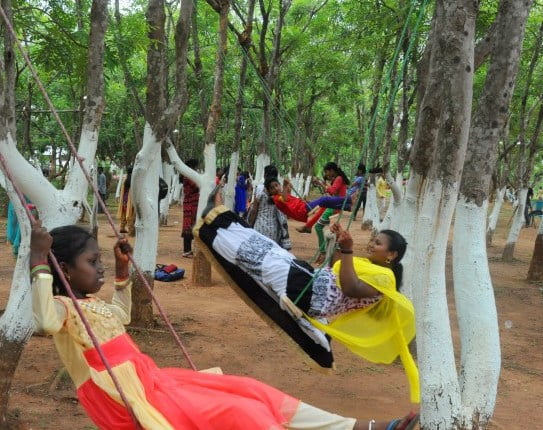 Bhubaneswar: Amidst taboos against menstruation, Odisha is celebrating it with a three-day-long Raja or Raja Parba, beginning Monday.

Myth and age-old tradition have it that during these three days of the Raja (literally meaning period) Mother Earth or Bhudevi has her period and on the fourth day, there is a ceremonial bath. No agricultural activity is carried out during the three days in the belief that Mother Earth needs rest while she is on period.

It is also called Mithuna Sankranti or the beginning of the Mithuna month, signifying the first showers of monsoon in the state which readies the soil for productivity. Pampering women during these three days when Mother Earth is menstruating is symbolic of how normal the subject of periods was in those days and also speaks volumes of a liberal society. It was not considered taboo unlike today when we need movies like ‘Pad Man’ to be made and the government to roll out special programmes to normalise the subject.

Unfortunately, the larger message of women’s liberation that this festival signifies is lost in the din of merrymaking in real life. Women continue to be considered impure during those four-five days of the month and where they are considered ‘Queen of the kitchen’, they cannot enter it when they are on period. Forget the community temple, even the temple at home is out of bounds.

Rutuparna Mohanty, founder president of MaaGhara Foundation, rues that the scientific bearings of the festival have been lost and its significance is now limited to social media only. “The values the festival stands for have been diluted. It is symbolic of the respect that women should be accorded throughout their lives not only for a few days. Both Mother Earth and a woman need a conducive environment to be fertile. You nourish the soil, you get a good crop. You keep a woman happy mentally and physically, she gives birth to healthy and happy children. Both need extra care,” she says succinctly.

Not undermining the positive aspect of the festival, Namrata Chadha, ex-member of State Women’s Commission, Odisha and president of Mahila Adhikar Abhiyaan, says, “The festival ought to be acknowledged for its exclusivity in that it celebrates womanhood, even if it is for three days. It gives society a basis to talk about menstruation openly and it happens only in Odisha.”

“On the flip side, as a society, we are hypocrites when it comes to festivals like Raja or Mother’s Day. We put women on a pedestal for a given day and the same men who sing paeans to sisters and mothers use the choicest expletives demeaning them in everyday life. Women should be accorded dignity 24×7, 365 days of the year,” she adds.

Women are also largely to be blamed for their own predicament. Mohanty says, “Emancipation of women can only be achieved when they themselves stop accepting biased societal norms twisted in the name of religion. Don’t goddesses bleed? Yet men pray to them. So, how can women be stopped from entering a temple when they are bleeding? How can anyone deny the very birth-giver her entity?”

Chadha sees no reason why there should be contradictions in gender equality in a state like Odisha which has a tradition of respecting women and where “Subhadra is taken on a yatra with her brothers Jagannath and Balaram.”

She feels there is very little awareness about Raja in the rest of the country. Odia artistes and film producers can share a little of the blame for not eulogising it in films and serials just as some north Indian festivals are.

The festival of Raja has two dimensions to it – an equitable society and a sustainable environment. Indeed, Raja can be a perfect platform for normalising periods, forging conversations around it and according a sense of dignity to menstruation.

Jhumpa Lahiri’s Whereabouts: A Novel Against The Grain