Jhumpa Lahiri’s Whereabouts: A Novel Against The Grain 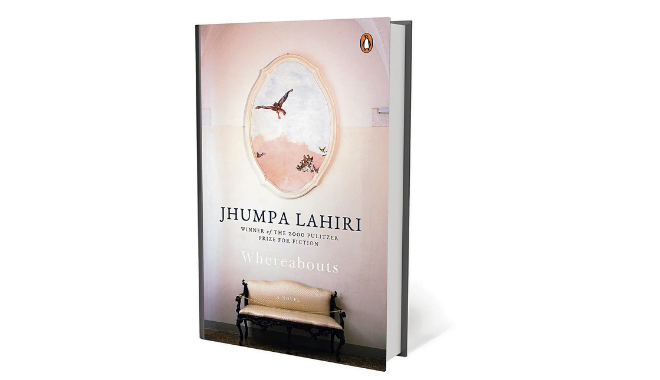 At a time when the world is in a tearing hurry and future projection is the name of the game, Jhumpa Lahiri seems to have discovered the pleasures of stasis and retrospection. Moving or looking back is not an escape route for her, for she has the courage to stare the signs of our times in their face. As a writer she has reasserted her traditional obligation to reflect and self-reflect. And in this she seems to have found common cause with the British novelist Graham Greene who said, very truly, that life was lived in the first twenty years, the rest being reflection.

Lahiri’s new novel Whereabouts tells us how the outside world is felt from the inside. More importantly, it holds up the inner dialogue, or monologue if you prefer, as the only true barometer of what in an facade-obsessed world is termed—falsely—as substantial. Yeats had ended one of his famous poems, “The Circus Animals’ Desertion”, with the following lines:

I must lie down where all the ladders start

In the foul rag and bone shop of the heart.

Lahiri’s novel is a re-doing in prose, in poetic prose, of this inward journey into the recesses of the heart.

The novel, set in an unnamed Italian city—identifiable by a cityscape distinctly Italian and reinforced by the strategic use of the Italian form of greeting ‘Ciao’, follows an unnamed first person narrator, a woman in her mid-forties, through her treks across the city streets, her social rounds, and her recreational pursuits over a one year period. She is an academic, and a reluctant one at that. She is single to boot, though not a spinster. She has known romance, love, seduction in the past.  She has writerly aspirations, and though she has that Jamesian prerequisite of the writing life, namely loneliness, she knows that things won’t somehow add up for her. Out of these unpromising and banal minutiae of the woman’s daily life Lahiri has been able to spin the gold of self-reflection.

The gold is this: no matter where we are and where we go, we can never get away from our self just as we cannot get out of our skin. And the self for this woman, as for many of us, is the sum of unhappy childhood memories, which are to do with being an only child hemmed in by a bone-weary, two-hands –are-not-enough but demanding mother, a low-earning penny pinching father—but with a passion for the theatre—and one who suddenly died when she was fifteen. She finds herself brooding a lot over her family, over how her fear of lasting relationships stems from her being a witness to an outwardly integrated but inwardly out-of-joint family. “What did I do? I read books and studied. I listened to my parents and did what they asked me to. Even though, in the end, I never made them happy. I didn’t like myself, and something told me I’d end up alone” (17). The positive thing is that she owns up to her solitude, recognizing that the mind’s razor-sharp operations need solitude as the nurturing soil.  Only an alert mind can hold out against the blandishments of a property, technology and glamour-obsessed world. As the woman prepares to leave the city for a teaching stint in another city across the border, she has had a moment of reckoning with herself.

I said that as a novel Whereabouts runs counter to the current trends of novel writing. It is also against the grain in another way, namely, it is a resumption of the Beckettian tale of self-translation. Lahiri has translated into English what she wrote in Italian originally. Given that Lahiri has insisted upon the ‘writerly art’ of translation, the way in which, for instance, translation can go ‘under the skin of the original’ and ‘shock the system’ (“The Joy of Translation as Discovery”, Literary Hub), it is indeed remarkable that the ‘prose poem’ of Whereabouts would be such a close approximation to her ideal.

Three Held For Gang Rape Of Minor In Odisha’s Kandhamal