Why Did Akshay Kumar & Priyanka Chopra Stop Working Together? 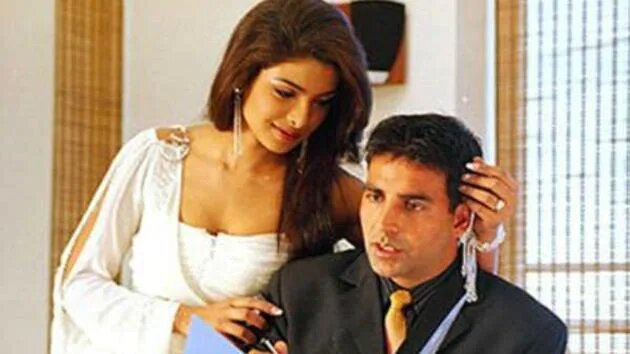 New Delhi: Akshay Kumar and Priyanka Chopra who delivered hits like ‘Andaz,’ ‘Aitraaz’ and ‘Mujhse Shadi Karogi’ stopped working together after 2005. Years later, filmmaker Suneel Darshan is claiming that the duo stopped working together due to objections from Akshay’s wife, Twinkle Khanna. Suneel, who directed ‘Barsaat’, which initially starred Akshay and Priyanka, said the actor dropped out of the project due to Twinkle’s reservations.

Barsaat, which was released in 2005, was a romantic drama that starred Bobby Deol, Priyanka Chopra, and Bipasha Basu. Akshay had originally been cast as the male lead of the film and had even shot a song with Priyanka, after which he reportedly backed out. Following this, Bobby was cast.

In an interview with Bollywood Hungama, Suneel Darshan said about the two actors, “Akshay Kumar and Priyanka Chopra were a very good pair, very similar in terms of their personal traits. They had amazing chemistry. I thought the song looked beautiful; no vulgarity, no obscenity, very sensuous. Then Priyanka went on a world tour, and when she came back… I don’t know what happened in between.”

The filmmaker added that he later got to know that Akshay’s wife Twinkle Khanna had allegedly raised objections at the two working together. “By then, I had also got to know of the other issues that had come up between him and his wife. She had issues with Priyanka, I was told… I feel the profession has its own hazards. Sometimes, the proximity, sometimes the individual’s own lifestyles, all these things come in the way and the media blows it out of proportion, without realising how much loss a filmmaker could suffer because of it,” he was quoted as saying.