Why You Need Your Dil Chahta Hain Story 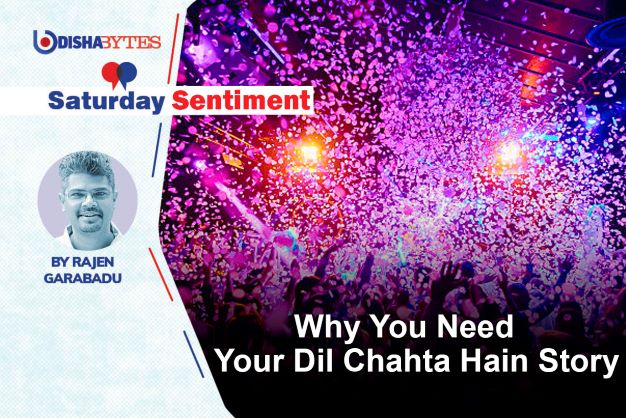 Have you lost your most prized possession during a journey?

21 years ago, my friend Sidharth Patnaik and I left my sister Babita’s house after a delightful dinner cooked by her to catch a cab to Victoria Terminus (now renamed Chhatrapati Shivaji Terminus). We were on course to board the Konkan Express train from Mumbai to Goa.

I was super excited because I had accumulated complimentary room nights thanks to extensive travel during work. I had chosen a 5-star beachfront resort near Candolim, to spend two nights.

Minutes after leaving Peddar Road, where my sister lived, the cab abruptly stopped due to a technical fault. My handbag next to the driver’s seat landed on the foot mat, impacted by the severe jolt.

It was late evening. The driver asked us to look for another cab. We unloaded our luggage from the boot, and I completely forgot about my handbag in the front. I remembered only when we reached the railway station. It was a new Nike bag with three pairs of shoes, including my dream pair of new sneakers I had spent a fortune buying. Besides other items too.

I had carried shoes for multiple purposes like I usually do. I loved shoes and would look to buy them even when I earned very little. The entire loss cost me more than half my salary then.

We had reached the station an hour before the train departure time. I went back to find my bag, hoping the driver would still be there at the spot the cab malfunctioned. If not, he may have handed over the bag to the guard at the gate of the colony where my sister resided. My sister had phoned the colony guard, requesting him to hail a cab.

I took my chance. Unsuccessfully.

The cab had moved on from the place we had left it. The guard outside the residential complex where my sister lived confirmed that the driver had not returned.

The driver of the second cab we had engaged gave me hope when he said I could still find my lost bag if the earlier cab driver deposited it in the Bombay Taximen Union Office. It was a common practice to do so, he said.

He then went on to share many stories of honest taxi operators in Mumbai. I heard them with interest and sent a silent prayer to the Gods if they cared to listen.

By the time we reached the station, the train was about to leave. My friend and I rushed to the platform after checking with a coolie where we could find Konkan Express. As soon as we entered the compartment on the train, it began to move. My slippers had almost disintegrated in the last-minute sprint to board the train.

My best footwear was gone. And now, my only remaining pair was threatening to fall apart. I cursed myself for being so absent-minded.

The lights were turned off. It was time to sleep. My friend Sid tried to pacify me as I was visibly disturbed. He knew how much it hurt me.

Nothing helped. I could not stop thinking about my loss. At some point, after a couple of hours, I fell asleep.

I woke up to find my fellow travellers enjoying the picturesque view of the magnificent mountain ranges. Sid encouraged me to check out the view. I had not been able to shake off the incident of the previous night. Reluctantly, I tried to heed Sid’s advice. But I couldn’t enjoy the scenic beauty of the breathtaking Western Ghats.

It was most disappointing.

We had set off on a short break after much planning and preparation. And now, when the time came to enjoy it, I was unable to. And this affected my friend’s state of mind too.

The train reached Madgaon station a few hours later. We proceeded to book a pre-paid cab to our destination. The driver exchanged pleasantries and set off towards the highway. He switched on the music system in his cab that played the title track of the film Dil Chahta Hai (DCH), released a month or two ago.

DCH was a pathbreaking film that changed the style of filmmaking in Bollywood. It broke the stereotype that the Hindi film industry was associated with. It was a story about childhood friends reconnecting after a long stretch while on a trip to Goa. More than the content, it was the form that was delightful. The story was beautifully told.

I was taken back to some of the moments in the movie, especially those filmed in Goa. The song, the drive, and the fresh air of Goa combined to open my closed and disturbed mind.

Sid was delighted to spot a hint of a smile on my face. DCH had managed to do what the beauty of the Western Ghats, rivers, and streams – that I crossed on the train – could not do. To finally get me to enjoy the moment – after 12 horrible hours.

Movies and music can have a deep impact on many. And that’s not uncommon. Those who belong to my generation may agree that only a couple of movies have been trailblazers in the kind of impact and emotion they generated. Qayamat Se Qayamat Tak (QSQT), released in 1988, was the first such breakthrough film during my growing up years that departed from the stereotype style and substance in mainstream movies preceding it.

The popular, mainstream film industry rarely experimented. There was too much money at stake. Filmmakers would copy the formula of successful movies. It was a very predictable strategy.

After QSQT, the next to break the mould 13 years later was Dil Chahta Hai. Both films refreshed the generation that watched them. They were styled very differently from what movie watchers then were used to seeing.

I was transported back to my cab in Goa in a few moments. I forgot about the bag and the shoes. I was ready to enjoy Goa in all its splendour. With or without shoes.

What also helped was our room in the hotel was adjacent to the one where Sameer, the character played by Saif Ali Khan in DCH was duped by Christine. Sid & I laughed out loud, recollecting the memorable scene from the film.

In life, you may face a few disturbing moments that hurt. Losing material possessions can be depressing if you are attached to them. You brood and despair till you are miserable. You fail to enjoy the best moments immediately after. The pain and shock caused by the previous incident grip you. To get over such moments, you need your own DCH story.

All of us have one or two such stories, memories, or experiences that enthrall us. It could be a film, song, play, book, game, or memory. You need to lose yourself in one such moment that works for you if that helps you shift gears from agony to ecstasy.

I did not find my bag after I returned to Mumbai. But it did not matter. Why worry or obsess over things that shouldn’t matter or matter little? Lost material possessions can be procured once again, if/when you find the resources to. Why let the loss of such things hound your peace?

Get over it. Enjoy the next moment. And if you still can’t, look for your DCH story.