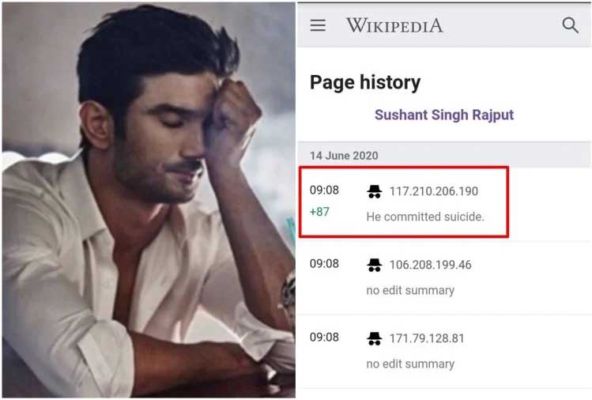 Mumbai: While the final postmortem and viscera reports have confirmed that Sushant Singh Rajput died due to asphyxia by hanging, his ardent fans are still speculating some foul play in his death.

The netizens have now come out with a strange allegation that Sushant’s Wikipedia page was updated with the news of his suicide hours before his death.

According to some social media users, the Wikipedia page was updated with the info that Sushant had died by suicide between 9 am and 9:30 am on June 14, when the actor was very much alive.

“The news of his suicide started doing the rounds between 1 pm and 2 pm on June 14. Then, how was the Wikipedia page updated at around 9 am?” questioned fans.

The late actor’s fans have even shared the IP address through which Sushant’s Wikipedia page was updated much before his death. 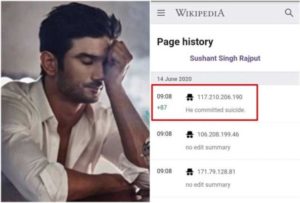 The die-hard fans of the actor have appealed to Home Minister Amit Shah to look into the matter and started trending #AmitShahDoJusticeForSSR.