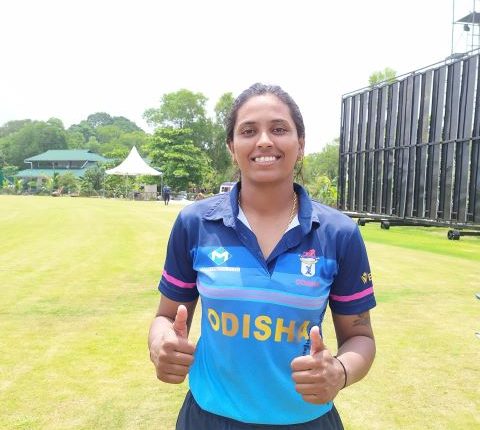 After winning all five of their Elite Group B games in Thiruvananthapuram, Odisha beat fancied Haryana by 13 runs on Saturday evening at Surat to book a semifinal berth against Railways.

Opener Madhuri Meheta led the charge with a 55-ball 66 to help Odisha post 151/6 in 20 overs after Haryana captain Shafali Verma – an India international – had won the toss and opted to bowl first.

Kajal Jena, the other opener, made 22 off 20 balls and Sushree Dibyadarshini contributed 16. But it was wicketkeeper-batter Pragyan P Mohanty’s 19-ball 30 and her enterprising fifth-wicket partnership with Madhuri that gave the Odisha innings great impetus.

Th two put on 65 runs in just 6.5 overs. Madhuri eventually at the end of the 19th over, while 11 runs were added in the final over.

The Odisha bowlers then came up with a disciplined effort to restrict Haryana to 138/8.

Sujata Mallik sent back the talented Shafali in the third over to give Odisha a headstart in their pursuit of 152.

Odisha Govt Revises School Timing From May 2 For Heatwave