Work From Home Vs Housewife 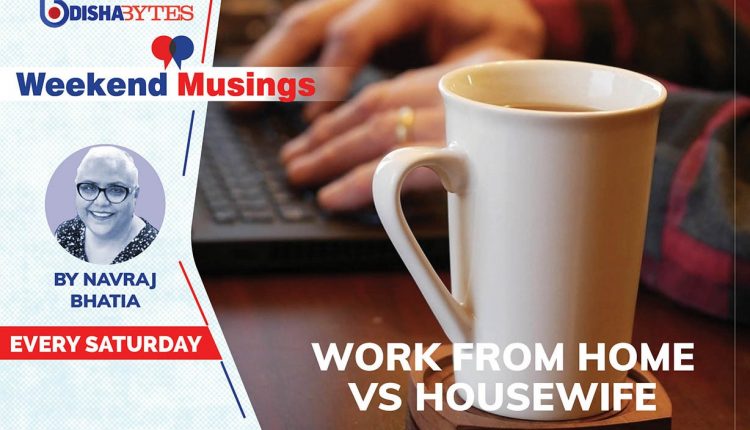 My friends consider me a wordsmith (I make no such claim). Even if I am one, I was left completely speechless (wordless, that is) at the beginning of the year itself.
All I could feel was a tsunami raging within me, a cloud about to burst, a brewing storm, a tornado…..The feelings translated into words could mean I was furious, livid, incensed, seething, irate, incandescent and above all, had murderous intent. But grant it to my fifty plus status, my grey hair and my conscious intent of keeping toxicity at bay like the coronavirus, I kept my cool.

The New Year dawned with me going to the physiotherapy centre due to debilitating back pain. The man at the reception wanted to know besides my name, age, address etc. my occupation to be passed on to the treating doctor. In all my wisdom, I thought that saying I ‘Work From Home’ (WFH) would give the doctor an idea about the genesis of my back pain. So, I told him please write WFH.

Imagine my disdain when he nonchalantly wrote ‘Housewife’ in the column. No-fuss, no second thoughts. It came naturally to him but hit me. Had it not been for the pain I was suffering at that time, I would have squared it out with him then and there.
Later, it occurred to me that this man represented a multitude of others in our country, who don’t spare a thought about a woman’s representation in society.
I have the highest of regard for the word ‘Housewife’ because there is no degree in the world that trains you to be one. It surpasses them all. If there was an MBA in ‘Housewifery’ it would require only the most exceptional and extraordinarily brilliant students to qualify.

Unfortunately, the lockdowns in the recent past have blurred the lines even more for women. They have been handling both jobs brilliantly all these years. But before WFH, despite the grind, they at least had a life away from home and could breathe a different air and see other faces. WFH has shut the doors on this other world.

World over, there has been research on how women emerged the worst sufferers during the lockdowns in terms of workload, downsizing, cutting salaries and domestic violence. It is high time a conversation was started on how to redeem the situation, on how to make WFH as dignified for women as it is for men.

How about calling the role of women who choose to take care of the family and its needs WFH?

Just food for thought for the man at the reception and others like him. “Will you write ‘Housewife’ for men who say they are working from home?

Cold Wave Alert: Night Temp To Fall By 3-5 Deg C At Most Places In Odisha During Next 2 Days

No Khandagiri Mela In Bhubaneswar This Year Also; ‘Jatra’ Likely To Be Cancelled