Wrong Identification Of Fish Species By Forest Staff Leads To Arrest of Fishermen In Odisha’s Kendrapada, Experts Demand Their Release 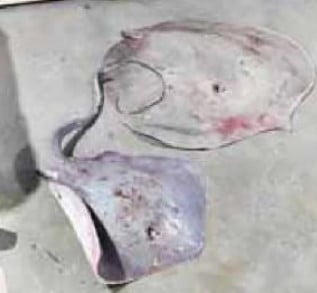 Bhubaneswar: Taking strong exception to arrest of two fishermen in Kendrapada district for allegedly exporting rays, which are protected under Schedule I of Wildlife Protection Act, 1972, wildlife experts have demanded their immediate release as the seized rays are not scheduled species.

Acting on information about alleged smuggling of protected species of fish to China through Kolkata, the divisional forest officer (DFO), Rajnagar, ordered a raid on a fish market in Rajnagar block. During the raid on the fish market near Garjanpur under Sanabadagopalpur panchayat, a team of wildlife officials found two rays (locally called Sankucha) in a basket. The wildlife team seized the rays and arrested two persons in this connection.

Anil Mohapatra,  a scientist of Zoological Survey of India (ZSI), in a Facebook post, has pointed out that the seized fishes urogymnus polylepis and pastinachus ater do not belong to any schedule under Wildlife Protection Act, 1972.

Pointing out that not all rays or sharks are included in the protected list, Mohapatra said, “Before arresting the fishermen, fishes should be identified by experts or the persons taking action should be aware about the Schedule rays.”

He also said Schedule I fishes like molluscs and corals are openly sold in places like Puri and the authorities concerned fail to take any action against the fishermen involved in the trade. “On the other hand, fishermen are arrested without capturing Schedule animals for their livelihood,” he added.

The scientist called for immediate action by the Forest department to release the two fishermen who were arrested without committing any crime.

It may be noted that under the Wildlife Protection Act, if any person, exercising powers under the Act, unnecessarily seizes the property of anybody, s/he can undergo imprisonment upto six months.

Colonel & His Family Among 7 Killed In Deadly Ambush In Manipur