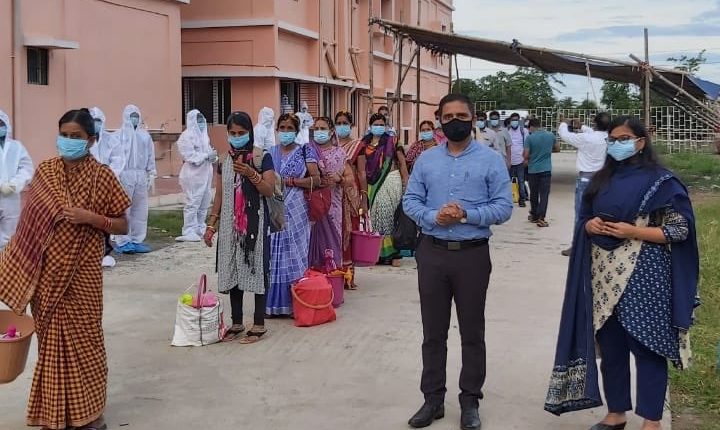 Berhampur: It was only in May that Ganjam district reported its first COVID-19 case after two surat returnees tested positive for the virus. Since then, the district has witnessed a steady spike in corona cases with the number mounting to 1137 till Friday (June 26).

The district, which was the first in the state to penalise people for spitting and not wearing a mask, also has the highest active cases of 318. The virus has so far claimed eight lives, again the highest in Odisha.

On June 24, it saw the highest single-day spike of 75 corona cases. The earlier record was 64 on June 5.

What is more disturbing is that more and more corona warriors are now getting infected. Since June 13, 108 frontline workers have tested positive for the virus, according to tweets by the district collector.

Media reports put the total at 170, which include ASHAs, Anganwadi workers, healthcare professionals and police personnel.

On June 9, a jawan of the Odisha Special Striking Force (OSSF) had tested positive for the COVID-19. He was on patrolling duty at Temporary Medical Camps (TMCs) under Humma and Khallikote police limits, SP Brijesh Kumar Rai had tweeted.

On June 8, four junior doctors and eight nurses of MKCG Medical College and Hospital, Berhampur, tested positive for the virus, according to the health department update. The medicos and the nurses had come in contact with a COVID-19 patient.

Similarly, two home guards of Polasara police station in Odisha’s Ganjam district were found to have contracted the virus. In a tweet on May 27, Ganjam SP said, both the frontline warriors were engaged in duty at Jagannathpur railway station and TMC.

Following the steady increase in cases, the administration had started a mega health screening programme on June 8 in which it planned to cover 3.5 lakh families and identify people with corona-related symptoms.

On June 14, the administration declared total lockdown in Ganjam to check ‘future’ community spread of the virus till June 30 and allowed essential services only between 7 am and 12 noon. Shopkeepers have been directed to follow social distancing norms and wearing mask and gloves. The administration also informed that 2 lakh migrants had returned to the district since the Centre allowed inter-state vehicular movement and started Shramik Special trains in May.

Also Read: Lockdown In Odisha’s Ganjam District To Remain In Force Till June 30

All government offices in Ganjam district were for public closed for 10 days, starting June 24, after 10 administrative officers tested corona positive the previous day.

On June 25, Collector Vijay Amruta Kulange announced a four-day shutdown from June 27 to 30 in Berhampur city that saw 32 positive cases between June 23 and 25.

The administration seems to be deploying every method in the book to contain the spread of the virus. But infected corona warriors can become a headache for the district, which is already going through challenging times amid the pandemic.

Speak To This App, It Will Tell You If You Have COVID Or Not